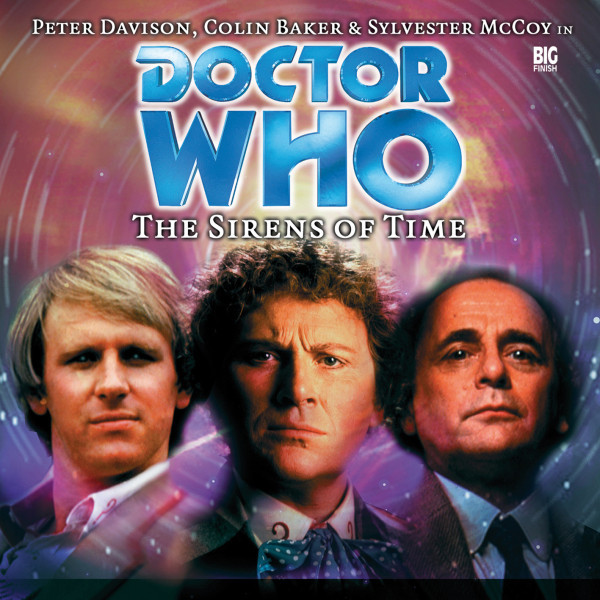 Gallifrey is in a state of crisis, facing destruction at the hands of an overwhelming enemy. And the Doctor is involved in three different incarnations - each caught up in a deadly adventure, scattered across time and space. The web of time is threatened - and someone wants the Doctor dead.

The three incarnations of the Doctor must join together to set time back on the right track - but in doing so, will they unleash a still greater threat?

On the weekend of Saturday 8th June 2013, we ran our first Listeners Club. We asked people what they thought of Sirens of Time. Here are some of the responses...

Aaron J Climas I won't buy this, as I owned the original!

This was one of my first audio dramas I had ever heard. I had to borrow my sister's CD player to listen to it, as I didn't own one!

The first thing that struck me was how much older Peter Davision sounded in the whole thing. Funny to think that now, his voice has aged so much more than Sylv or Paul's.

I think it was a brave decision to start off the new series with Time Lords and Presidents and things, because other than the first 2-3 minutes, the whole thing is very fresh. Because of the Time Lord material at the begining I have always put off lending the CDs to friends as an introduction to the series, and normally start with releases 2, 3 or 4.

Also a little 'did you know?' there are TWO versions of this, with slightly different mixing, fiixing up some inconsistant audio levels on the original release. I think most people found themselves riding the volume control on the origainal release.

I don't know if it's because it's the first story, or a multi-Doctor story, or my first big audio story, I feel it's a classic!

Danny Lavery: I became a Doctor Who fan in March 1999, first DWM was 279 with the 'Talking About My Regeneration' coverdisc and I went to the Battlefield convention in the October. Bought this off Jason Haigh-Ellery himself at his little table in the dealers' room, my first audio play. So you guys are a HUUGE part of my Whovianism. And how you've grown and blossomed!


Floris Overvelde I loved how the Doctors *got along*. One, Two and Three all squabbled among each other, Two and Six found each other very disagreeable, but then Five, Six and Seven are all in the same room and it's all

Niki Haringsma I like "Sirens" quite a bit, it's a good start and I especially like the way Six was written - it reminded me of his pragmatism in "Vengeance On Varos". Nice introduction to Big Finish, and I really love the idea of starting the monthlies off with all available Doctors. Also adored the little nods to the Audio Visuals. I was never fond of minor characters who tend to hack and cough and cackle like they're in a panto, though, it just never really works for me. And "The Four Doctors" is the release I'd go for if I want to recommend a Big Finish story with multiple Doctors, since it's slightly more polished. But overall, really nice plot and fun to look back on it as a sort of group project like this.

Rick Cross Personal backstory: I wrote and helped produce an hour-long Halloween radio drama in college -- the first (and last!) ever aired at WWVU-FM (U-92) at West Virginia University -- and was obsessed with radio theater forever after, trying and failing to pitch a multipart adaptation of Stephen King's THE STAND to Tom Lopez and ZBS Productions, makers of THE MIST and among the VERY few radio drama creators in the U.S. at that time (1990-91). Hitting brick wall after brick wall, I kinda gave up on the artform -- til my son reintroduced me to DOCTOR WHO in 2009-10 and we started investigating Big Finish audio productions (mostly thanks to my friend Ben Taylor). Instantly hooked with "The Sirens of Time." Bold, aurally atmospheric in spades, and uniting three Doctors to hilarious effect -- I couldn't get enough. "Sirens" led me to purchase (to date) 275+ audios. Been a faithful subscriber ever since. "Sirens" did that. All this is my way of saying "Yes, it's that good!"

Roger M Smith Got this first time round. Always love this great introduction to BF. Which I still rate in my top 10. And still recommend as a starting point. Enjoy.

Marc Ofner I bought this upon it's orginal release in 1999 and have continued to get every release since. I remember the sheer excitement when this came out as bar a complete miracle this was the only 'nu-who' at the time. Couldn't wait to get it home and play and when I did it was complete rapture. To hear the 5th, 6th & 7th drs again and interacting with each other was a total joy. I quite often get it out and re-listen to it now and again to take me back to where it all started. Still wish Big Finish would take charge of the tv show

Kai Soanes I do love this one. I'm going to have to hunt it out when I'm next down at my parent's (left it there accidently when I moved about six yeara ago). It's certainly one of the best multi-doctor stories so far. The Two doctor's has without a doubt been the worst

Phil Markham Remember having to get this on cassette as I couldn't track down a cd copy(days before the Internet) loved it then/now and been hooked on big finish since '99 looking forward to next year and 15 years of Who!!!

Neil Henderson Have this. It should be titiled The three Dotcors 2.

Cora McElhaney Started off watching nuwho and then tried Big finish because I love audio dramas. Love the Doctors interacting and seeing how they handle situations differently. One that I never hesitate to reccomend.

David Hogan I enjoyed it the two times I've listened to it, though Episode 1 with Seven is on the weaker side... very weaker side, the Fifth and Sixth Doctor parts are enjoyable mini-stories and I love the final part. Hearing 5-6-7 interacting was surreal in a very brilliant way.

Andrew Kaplan I bought it when it originally came out as well. I haven't listened to it for a while, but I remember it being huge fun, and had me excited about the whole line. (An excitement which hasn't faded since.)

Rick Cross What thrilled me most right off the bat was the INTELLIGENT sound design. The story doesn't hand-hold the listener; it makes you do some of the work. It compels you to stop whatever you're doing, sit down and open your mind, let the voices and sounds wash over you so you begin to visualize the characters and events. I love the fact that of the thousands of listeners who've enjoyed the tale, no two have ever seen it identically in their mind's eye. THAT is the true power of radio drama/audio theater -- and that's what "Sirens" did so well right from the start.

Jim Clauser So cool to hear all three together.

Mary Jo Chrabasz I bought this a while back & listened to it a couple months ago. I really enjoyed it, just the combo of three excellent Doctors was amazing! But I loved the story too.

Bob James Multi Doctor stories are always tricky. It seems that it's so easy to just fall into an "everybody in the pool" mentality. This was a solid story though, with a genuinely believable reason for these three incarnations to be brought together. I've always enjoyed the multi Doctor Big Finish stories much more than any of the television ones up to this point. "The Four Doctors" is another great example........

DJjonny Booth my first ever audio on tape back when there was no genius of davies or the insanity of moffat. still in my top 5 audios even after all these years, they still stand up

Rebecca Mannox Me and my bro were pretty young when this came out, and mum got it for us as we'd always been into Who. It was simply fabulous, and lead us into buying as many as we could from then on. There's quotes from it we still use today. It was instrumental to us in the years between the TV movie and my going to University, at which point I had a student loan to go on buying the bbc books too

Mark Ashley Pattison Long time since I listened to Sirens. Most memorable for me was Maggie Stables growling like some Blackadder character, completely unrecognisable from Evelyn Smythe. No bad memories; I think it did what it said on the tin and was a rather good intro to three awesome Doctors for anyone new to Doctor Who in '99. Admittedly I only stuck with BF for a handful of early releases, got lazy with my listening for a year or two, came back to it and look where we are now! Sirens of Time was a reasonable stepping stone for everything audible and visual to come.

Chris Wing Even though there has since been better tales, Sirens of Time will always be the one that started it all. To have a brand new tale with most of the surviving Doctors was just an 'EVENT' and pretty much set the audio standard. I don't neccesarily the story standard (although I love the story), but the whole notion of returning actors was just such a novelty, a wow factor that could not have been done any better than a multi-Doctor tale. It had to be done and I was blown away. Couldn't wait for the next one.
Nowadays, I guess we can take our audio releases for granted, but, for the first one, it was a new medium for the franchise, and it was just amazing.

Michael Regan I just listened to this one last week. An incredible story!

Neil Christie Didn't expect to get this new 256K bitrate and h-res cover listener version, I can even download the audiobook version all for free, just because I had already bought the CD. Wonder if I'll get the new listener version of other releases if I only got the Download?

Leanne Kinkopf I loved the interactions between the Doctors in this one~ This is the first one I listened to and the one that got me hooked. I was surprised at how solid the story was for having three Doctors in it. Very well done.

Bethanie Innes Big finish is my favourite form of DW these days and this was a great start to the series. The doctor never learns to get the whole story before he goes charging in to fix everything. Very wibbly wobbly timey wimey.

Shop all audiobooks
Next release in this range: Doctor Who: The Sirens of Time Part 1 (DWM promo)