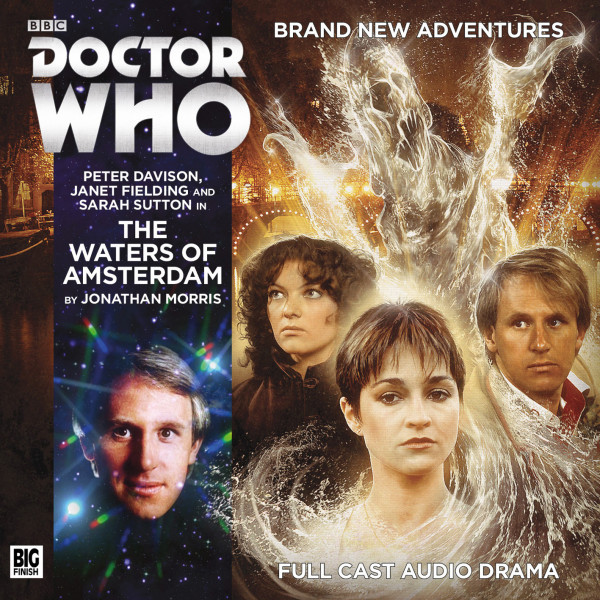 208. Doctor Who: The Waters of Amsterdam

Reunited with the Doctor and Nyssa, Tegan joins them on a trip to Amsterdam's Rijkmuseum to see a new exhibition of the work of Rembrandt van Rijn, featuring his drawings of “Vessels of the Stars”. The Doctor is astonished to discover that they are designs for spaceships that would actually work, and decides to pop back to the Dutch Golden Age for a quiet word with Rembrandt – but the world-weary artist is no mood to help.

Meanwhile, strange forces are swirling in the canals, creatures from ancient myth, the watery, goblin-like Nix. What is their connection to the mysterious Countess Mach-Teldak – and to the events of Tegan’s life during her year away from the Doctor?

These notes don’t really contain any spoilers for the story. They do, however, contain spoilers for the writing process, so if you don’t want to know how I wrote it, please stop reading now.

It all starts with the brief, which in this case was to tell the first story after the widely-regarded television adventure Arc of Infinity. Possibly set immediately afterwards, utilizing the same location of Amsterdam. Script editor Alan Barnes also mentioned that the story could explore Tegan’s domestic life between Time-Flight and Arc of Infinity (she leaves in Time-Flight, you see, and then returns in Arc of Infinity). So, with that brief, I then went away and checked through my list of Doctor Who ideas, to see if I could shoehorn any of them into an Amsterdam setting. I couldn’t, so I had to come up with a new story; something that would actually use the setting as a part of the story (in a way that Arc of Infinity, arguably, failed to do).

But what is Amsterdam famous for? Well, clogs, windmills, little mice on stairs going clip-clippety-clop, tulips, the red light district and its various nefarious attractions. I thought back to my last visit to Amsterdam in 2013 – what did I do? I visited the locations from Arc of Infinity, which wasn’t much help.

Then I thought of other places I’d visited in Amsterdam. The various art galleries and museums; the Rijksmuseum, the Stedelijk Museum (home of Keinholz’s The Beanery, which inspired a Doctor Who novel I wrote many years ago), the Van Gogh Museum... Well, Doctor Who had already done a Van Gogh story, and very good it was too, so that was out, but I also visited Rembrandt’s House (which is well worth a visit) and that gave me a starting point. A story that involved Rembrandt... which would mean it would be set during the Dutch Golden Age, around the time when Amsterdam was the centre of the diamond trade, as well as the Tulip stock-market bubble (which may be a myth). And if the story was about Rembrandt then it could begin at the Rijksmuseum... and maybe there could be something sinister lurking in the canals?

And, gradually, I found my way into a story, a story incorporating some of the above ideas, whilst also shedding some light on what Tegan’s life was like after Time-Flight. That whole idea of taking a sabbatical from travelling in the TARDIS struck me as interesting, the difficulty you would have returning to everyday life after travelling in time and space. You wouldn’t be able to pick up from where you left off, would you? And what if you met someone – would you be able to tell them about your adventures, or would you deny that part of your life, keep it a secret?

I started getting excited by that idea, because the more I thought about it, the more it grew and offered interesting dramatic and comedic possibilities – which means it was a good idea – and it felt like I was doing something that hadn’t been done in Doctor Who before, that would give me a chance to explore the character of Tegan in more emotional depth, and give the brilliant Janet Fielding some juicy material to work with.

And, having written the script, I think that’s the thing about the story I’m most proud of; the moments where it takes time to explore the characters’ emotions. While on one level it’s an adventure story about aliens, time travel, spaceships and all the usual Doctor Who stuff, the best bits are, I think, the quiet moments where it is about how relationships go wrong and what it’s like to live with loss and grief. Because Doctor Who doesn’t usually do that sort of thing.

And listening to those quiet moments in the finished story, the cast and director Jamie Anderson do a fantastic job. That’s the great pleasure of writing these stories – when you hear it back and are surprised by how your words have been brought to life, how some scenes are funnier, some scenes are scarier, and some scenes are more moving. And then you get the inordinate joy of thinking that your writing had something to do with it.

This is a very, very good release... an extremely polished production with plenty to enjoy and, to my mind, certainly one to recommend to newcomers to both Doctor Who and audio drama.

With a sterling musical score by Jamie Robertson, excellent writing by Jonathan Morris, wonderful sound effects from Martin Montague, some tight direction by Jamie Anderson and of course resounding performances from the regular and guest cast, this is a splendid start to the Doctor Who 2016 range.

Some strong work across the board makes this one of the best Fifth Doctor tales from Big Finish. 9/10