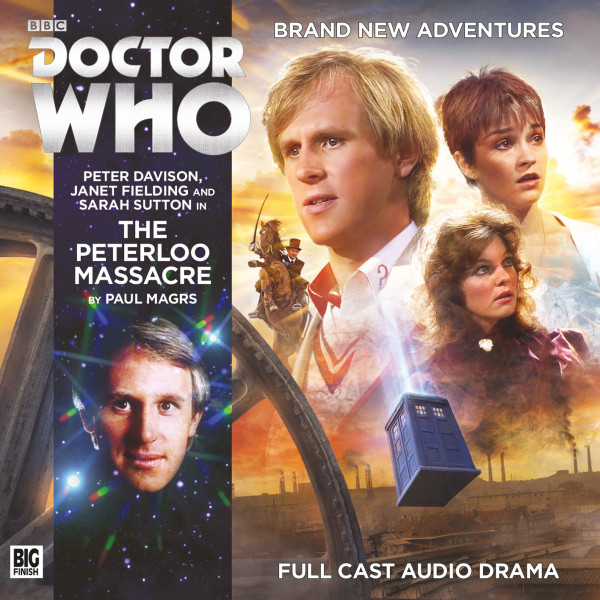 210. Doctor Who: The Peterloo Massacre

"They say there’ll be thousands pouring into Manchester tomorrow. From all over the county, north and south. It’ll be a piece of history. People will remember this!"

Lost in the smog of the Industrial Revolution, the TARDIS crashes four miles south of Manchester, in the grounds of Hurley Hall – a grand mansion belonging to a local factory owner, a proudly self-made man. But while Hurley dreams of growing richer still on the wealth of secret knowledge locked up in the Doctor’s time and space machine, his servants hope only for a fair day’s pay for a fair day’s work. His young maid Cathy, for instance, whom Nyssa learns is looking forward to joining the working people’s march to St Peter’s Field, in the heart of the city. There’ll be speeches and banners and music. It’ll be like one big jamboree…

Or so she thinks. For the city’s establishment have called in their own private militia, to control the crowd. One of the darkest days in Manchester’s history is about to unfold – and the Doctor, Nyssa and Tegan are right in the thick of it.

This time I’ve come even closer to writing what the fans call ‘a pure historical’. (I love these shaded gradations in a whole spectrum of terms used to classify Doctor Who stories. It’s amazing, really, how specialized it’s all become! And how exact the descriptions.) A ‘pure historical’ is the term used for a story that features no SF elements at all – simply the TARDIS used as a device to deliver our heroes to the scene of the adventure.

Once there, as in those ‘pure’ tales of the 1960s, the TARDIS crew must fend for themselves. They are left in the machinery of real time and are generally drawn into a terrible predicament as each episode brings us closer to their facing a specific (and often famous) moment in history. There’s a wonderful feeling of inevitability about it all. The Doctor’s role – knowing he can’t change any of the unfolding events around him – is to keep his friends from being chewed up and spat out by ineluctable fate.

Alan Barnes suggested a few moments in history I might like to look at this time. I live in Manchester and, when I’ve research to do, it’s usually in Manchester Central Library. At the time of planning this story, the library had just been reopened after a few years’ worth of drastic alterations. I was happy spending whole days in there, reading all kinds of things and making notes. And, of course, being in there and thinking of cataclysmic historical events, I couldn’t help dwelling on the Peterloo Massacre. After all, I was standing on the very site of those events of one day in August, 1819.

I decided at once to read about the whole business again, that very afternoon and, by evening, I knew what I wanted my ‘pure historical’ to be about. It’s a story about terrible unfairness and social injustice. It’s about hope and bravery being trampled into nothing by greed and prejudice, snobbery and hatred. And it’s about how hope can survive such terrible events. I spent days and days reading all the relevant stuff, and worked at pulling out the key moments and character-types I would need to make this into a workable story. Not just any old story – a Doctor Who story, which is a very specific thing, with its own requirements and inevitablities. In the midst of this disaster, the Doctor and his friends must always find a way to be heroes; to champion the oppressed and to perhaps learn something about how, in real life, things can become much more complicated than that.

In short, I’ve tried to do justice to a very important story. It’s a humbling thing, when you read about events like this and try to turn them into a tale, but I hope I will at least have managed to make people interested enough to read up a bit more about what happened in 1819. That would be the best thing for this story of mine to accomplish.

This is an exceptional release and there have been a lot of those lately, but this really is something special. Paul Magrs, Jamie Anderson and all involved in the production can take a bow – this story can proudly stand shoulder-to-shoulder with the best of the best.

The drama is first rate, the performances wonderfully realistic. Magrs and Big Finish prove that the Doctor doesn’t need aliens and monsters to tell a compelling and historical yet relevant story.

I’m a huge fan of Paul Magrs work, both literary and audio, and he has once again rewarded my eternal faith by delivering a story that, while adhering to the facts, is moving, absorbing, suffused with intricate and carefully constructed characterisation and motors along at a fair old clip.

The Peterloo Massacre is unlike any other Doctor Who story I've heard... Peter Davison gives his best performance for years in a story that is structured quite unusually, but works perfectly... This story really is in a class of its own. 10/10

...some of the most beautifully haunting vocal led music that I’ve ever heard from Big Finish... Peter Davison’s portrayal of the Doctor in this story is absolutely stellar... It really knocked me for six like no other form of Doctor Who ever has.