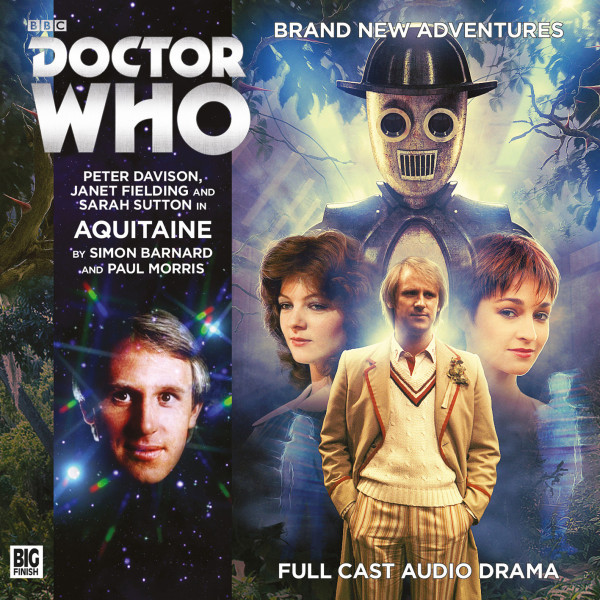 Today should be much like every other day for Hargreaves, the computer consciousness that co-ordinates daily life aboard the spaceship Aquitaine, stationed on the outer fringes of a black hole. Water the plants, run the diagnostics, cook the Captain’s breakfast; then tidy the plates away, rotate the ship, clean the windows of the observation deck. When at last the day’s work is done, Hargreaves will dim the lights in the sleeping quarters. But no-one will sleep aboard the Aquitaine tonight. Because the Aquitaine’s crew is missing.

But today will be different. Today, a space/time ship called the TARDIS will materialise in the botanical section, bringing the Doctor, Nyssa and Tegan aboard the Aquitaine. Together, they’ll seek to discover the truth of what happened to Hargreaves’ crew…

… if only the ghosts will let them.

It began life as a very simple idea: a “haunted house in space”, where the disappearances and ghostly presences such a story demands would be the result of natural, if rather esoteric, phenomena. It was reading about a peculiar property of black holes known as the ‘ergosphere’ that gave the story its setting. In a nutshell, the ergosphere is an ellipsoidal region located outside a rotating black hole. Within this region, spacetime moves faster than the speed of light, and its ellipsoidal nature results in pockets where it’s possible to travel both backwards and forwards in time. (Google it, they’re fascinating.)

The original conception was for a story that would mainly concern the travails of Doctor Who and his companion when they unwittingly wandered into this ‘haunted’ spaceship. The main supporting character would be the ship’s diligent but eccentric computer, Hargreaves – basically a robot Jeeves (as this writing partnership consists of one P G Wodehouse fan and a second, even bigger, P G Wodehouse fan). The story would be a two-hander between the Doctor and Hargreaves, or possibly even narrated solely by the latter. (And, although the story has now grown in the telling, the concept of Hargreaves as unintentionally unreliable narrator was so appealing that it survived to the final draft in a number of places.)

A basic storyline was worked up, and then, as it the way of these things, stuck in a virtual drawer somewhere and forgotten about. Until, sometime later (possibly years? Who can say), we got the call from script editor Alan Barnes stating that he urgently needed a script for a “futuristic, off-Earth, science-fiction-y” story; “quite season 20ish in feel; not too quirky but not too guns-and-troopers-and-bases” (which is as good as description of season 20 as you’ll find). Ergosphere seemed, in our humble opinion, to fit the bill perfectly, and on closer inspection the original idea proved to contain within it the germ of a four-part, full-cast story. Luckily Alan agreed.

The first benefit of this increased length was that we could now meet the crewmembers of the Aquitaine in the flesh, where once they had been doomed to remain nebulous. Also gaining greater prominence was a subplot in the original story concerning the time-distorting effects of the ergosphere on the contents of the ship’s botanical laboratory - the deadly results of which were now (without giving too much away) given a helping hand by a person or persons unknown. Overall, the greater length allowed us to increase the sense of loss, separation and general despair that is at the core of the story. As we always say, the more characters you can be cruel to, and the longer you can be cruel to them for, the better.

Originally the story was about the strange effects of a black hole, and was named Ergosphere. It’s now more concerned with telling the chequered history of the research ship Aquitaine when it unwisely strays too close to an unstable black hole, and as such it was decided to rename the story in honour of the ship itself. In a sense this only helps with the Season 20 feel. “Ergosphere” has a wonderfully esoteric C H Bidmead vibe, but for the period we’re aiming for that’s a bit last-season. Aquitaine has the more tangible heft of a Terminus, say; and with the ship almost feeling like a character in its own right - it gets the lion’s share of the sound effects directions, for one thing - it deserves star billing.

On that subject, a round of applause for Andy Hardwick’s music and sound design – everything we could have wished for; pointing up the full gamut of emotions that the story travels, differentiating the various forms of Hargreaves, and generally making both us and our wonderful cast sound as good as possible. All that, and possibly the biggest explosion we’ve ever heard. Bravo!

But yes, it’s also about a Time Lord’s unlikely friendship with a robot butler who likes tea even more than he does.

The Four episodes just fly by - the story really is that absorbing, time travel, infection, greed, ethics beeswax and tea making have probably never been in the same sentence together, but Aquitaine has made it possible. It is a story that demands to be listened to on multiple occasions to fully appreciate the nuances of the script and how it works hand in hand with the musical score and the subtleties of the cast - a real gem of a story and an utterly charmed 10/10.