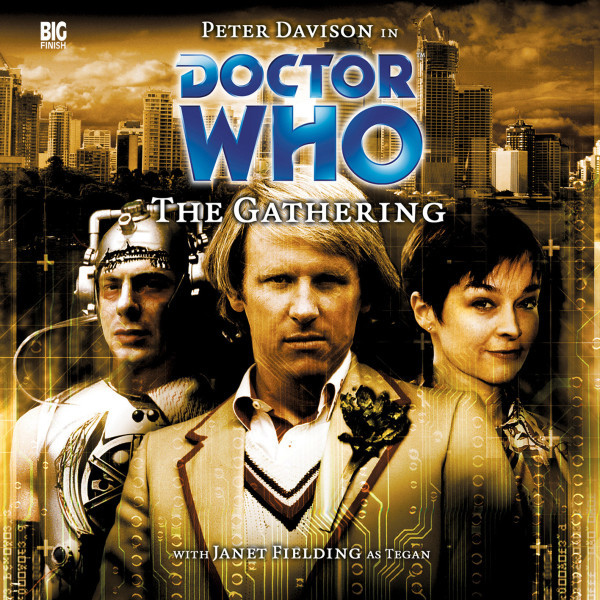 087. Doctor Who: The Gathering

On the morning of 22 September 2006, Tegan woke up. She was expecting to spend the day relaxing at home and, that evening, tolerate a party thrown to celebrate her 46th birthday. But things don't always go as expected, ­it's been over twenty years since she chose to leave the Doctor. She's got a job, mates... a life.

Meanwhile, her friend, Katherine Chambers, makes a decision that could change all their lives, and Tegan discovers that you can never really escape the past.

Chronological placement:
The Gathering takes place between the television adventures Planet of Fire and The Caves of Androzani.

This story had the working title Summer in the City.

An article in Vortex 51 looks at the creation of The Gathering:

Newcomers to Big Finish might find it hard to believe that once upon a time, Tom Baker and Janet Fielding weren’t interested in recreating their roles from Doctor Who, even though they’re now regulars in Big Finish plays.

Back in 2006, producer/director Gary Russell finally persuaded Janet, after years of trying, to have one final outing as Tegan Jovanka. “I had worked very hard to convince Janet to do one for Big Finish,” says Gary. “She would say, ‘No, no, no, no, no, no, no, okay.’ I thought I’d come up with a story that would appeal to her – it would be a story featuring Tegan now, years after leaving the Doctor, so she wouldn’t be recreating the part as it was then, as she had been very vocal in her views about female companions.

“As a character Tegan had gone through so much, and I wanted to show that even after you finish travelling with the Doctor it still has an effect on your life – and this was before [TV episode] School Reunion! We wanted her to have picked up something on her travels, so this maybe was her last story. I wanted to show it wasn’t happiness and roses all the way.”

The writing assignment was handed to Joseph Lidster, who was given the chance to add Cybermen into the mix – as well as tying the play into The Reaping, a Sixth Doctor and Peri story also with Cybermen which would be the previous release.

Joe remembers, “What was fun was working out how the two stories were linked and how each worked as both a prequel and a sequel to the other. I also enjoyed developing them as complementary adventures – the structures are similar, both feature newsreaders commenting on the action, similar opening sequences of news reports from throughout time, repeated phrases, and both are very explicitly set in a specific timeframe.”

Bringing back the feisty Australian caused Joe some trouble. “Writing for Tegan was a real challenge. I didn’t want her to be a parody who wandered around saying ‘Rabbits’ and ‘It’s an entry coder’, but I also couldn’t ignore the fact that whereas Peri was bolshy and argumentative, Tegan was often just plain miserable. She could have a laugh but you rarely saw it in the TARDIS.

“Also, the big problem I had was that Janet wanted Tegan to be killed off. Anyone who’s listened to my stuff knows I like to put characters through the wringer, but it just felt wrong. It was too depressing and it was one of those things that wouldn’t really have repercussions – there’d be no reason for it.”

Of course, things would change in the future – Janet had fun at the recording. She was tempted back into the Big Finish world for more adventures as the younger Tegan, with Turlough, Nyssa and the Doctor, the latest of which, The Lady of Mercia, is released this month.