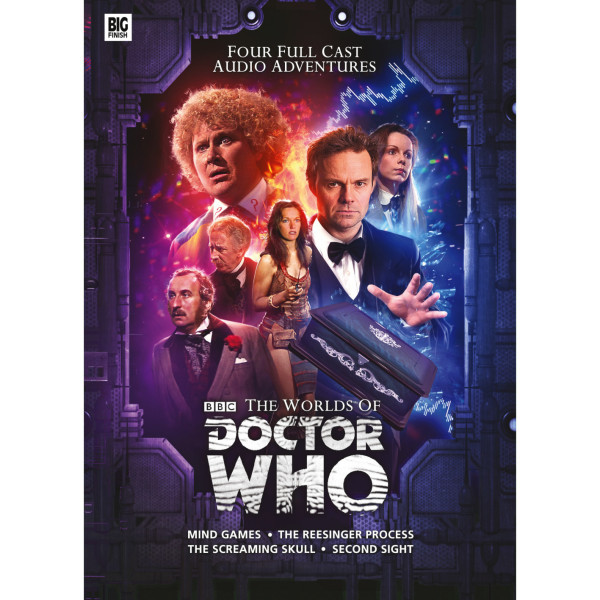 Doctor Who: The Worlds of Doctor Who (Limited Edition)

Download
US $36.15
Buy
Login to wishlist
30 Listeners
recommend this

An epic adventure uniting the Doctor's friends across time and space, featuring Jago & Litefoot, Counter-Measures, the Vault and Gallifrey!

1. Mind Games by Justin Richards
In Victorian England, Henry Gordon Jago and Professor Litefoot investigate worrying events on the streets of London – which seem to be linked to the New Regency Theatre’s resident act, the mesmerist Mr Rees…

2. The Reesinger Process by Justin Richards
London, 1964, and the repercussions of Jago and Litefoot’s adventure are dealt with by Sir Toby Kinsella and his crack team of specialists at Counter-Measures. What is the Reesinger Process – and who is behind it?

3. The Screaming Skull by Jonathan Morris
Disgraced soldiers Ruth Matheson and Charlie Sato are called back into action by Captain Mike Yates, when the UNIT Vault is mysteriously locked down by a deadly force. Together they must infiltrate the Vault and get those trapped out alive. But what enemy are they facing?

4. Second Sight by Nick Wallace and Justin Richards
The actions of Mr Rees have alerted the Time Lords of Gallifrey, and Romana has assigned her best warrior. Independently, the Sixth Doctor has arrived on Earth. A power from the dawn of the Universe is about to be unleashed once more…