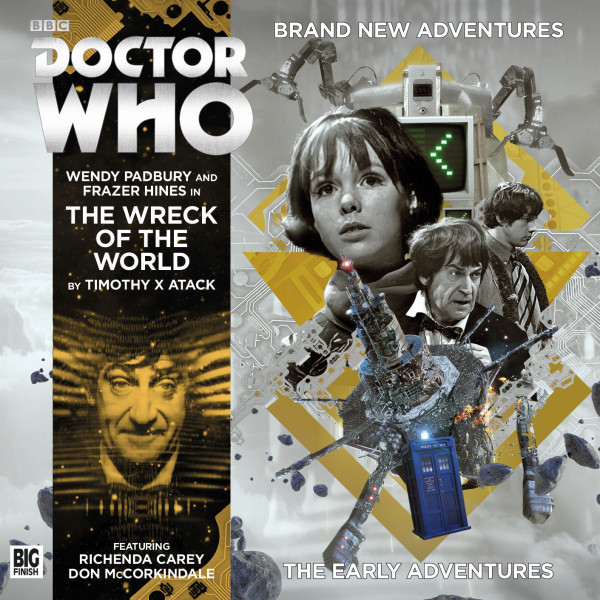 CD
US $20.24
Buy
Download
US $10.99
Buy
Save money with a bundle Login to wishlist
15 Listeners
recommend this

Undergoing repairs in deep space, the TARDIS is caught in a collision with the huge, decaying wreck of a starship. Zoe, spacewalking, is separated from her companions in the crash, and the Doctor and Jamie wake to find the TARDIS fused to the side of the ship.

Venturing inside to rescue their friend, they discover that they are on board The World, the very first colony ship to leave Earth, lost mid-voyage under unknown circumstances.

And they are not alone. A terrible suspension chamber is filled with dead, withered human bodies, and a team of gun-toting astronauts are stalking the corridors. But a far greater threat lurks deep inside. The terrifying force responsible for the scuttling of the ship is active once more - and if it can’t be stopped, it won’t just be the end of this World. It’ll be the end of all of them.

"10/10 ‘The Wreck Of The World’ is a Second Doctor story that may just be an instant classic." - Blogtor Who

"Frazer Hines is as always flawless as the Second Doctor, whilst also giving his all to Jamie." - Indie Mac User

"Timothy X. Atack’s first contribution to the Early Adventures very much evokes the period of the TV series in which it’s set, with Wendy Padbury and Frazer Hines stepping back nearly half a century with ease." - SciFi Bulletin

"Horror fans will definitely love this one. Beyond the atmosphere and the mixture of science-fiction and horror, one final reason the story stands out is Zoe. The Wreck of the World is a really strong debut from Timothy X Atack. For one thing, it perfectly fits the original era it’s written for. But there’s also a great deal of freshness that’s added, too." Doctor Who Watch

"4/5 ‘The Wreck of the World’ truly is an impressive Doctor Who title, meshing very human emotions and characteristics with a threat that reaches back into Earth’s history and beyond" - Doctor Who Reviews

"5/5 It’s a very strong story, and if this is the quality Timothy X Atack can produce, we can expect to hear more from him in the future. Once again the Early Adventures range proves itself as strong as any other output from Big Finish." - Cultbox