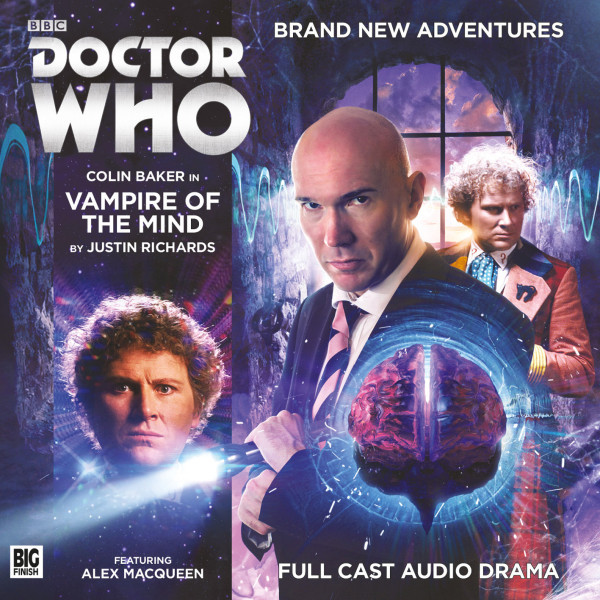 Somewhere off the South Coast of England, there’s a lonely island. On that island stands a solitary castle, long since abandoned – haunted, they say. But the truth is, that castle houses something far worse than mere ghosts.

The castle is what lies at the end of a trail followed by the Doctor in search of several missing scientists – all of them connected to the top secret Dominus Institute and its elusive CEO, Sir Andrew Gobernar...

But the Doctor will soon discover that he’s the one being haunted, by a ghost from his past... or perhaps, his future.

Aside from a short story, I think Vampire of the Mind was the first time I’ve written for the Master. But he’s a character we know so well – in all his incarnations – that he’s easy to get to grips with. Even in this story, where his incarnation is a little out of the ordinary…

The brief I was given by Alan Barnes was fairly broad. The main thing I needed to include was something from the Master and the Doctor’s past. I don’t think Alan stipulated what sort of thing it had to be – just something that would ultimately act as a clue to the Doctor as to what was going on, and which implied the Master had been planning things for a while. Or at least, had picked up on some plan or scheme he never brought to fruition in the past. Rather than a character or a device or returning alien menace, I decided on a place.

The question then was, what place? Where was important to the Master and was somewhere that he might have had the time and a good reason to set in motion the sorts of things I wanted to tell a story about? The answer, when I thought of it, seemed fairly obvious in hindsight. Hopefully it makes as much sense to the audience as it did to me.

And so on with the story. Given the Master’s expertise at hypnosis, I wanted a plot that enabled him to play mind games with the Doctor and other characters. That gave me an idea for the alien threat the Master is using, which in turn meant that I had enough of the bits and pieces of the story to flesh it out in detail. It was – like all Big Finish scripts – great fun to write. I hope it’s as much fun to listen to!

There's a lot of death, deception and dastardliness. This is Doctor Who at its darkest, and it’s delightful. 9/10

This story is very clever in that it ties so much of the Master's history with the Doctor into the Master's future with the Doctor, and yet you could totally enjoy this story without knowing ANY of it. Which makes this tale one of the best possible scenarios for a new listener coming into a story involving these two.

The monsters are surprisingly effective... It would have been all too easy to have the Master hypnotising a bunch of locals to do his bidding, but when you learn who they are and what happened to them it adds an extra layer of ruthlessness that suits the villain perfectly. 9/10

Colin Baker vs Alex MacQueen: A match made in heaven. MacQueen seems to be the go-to incarnation for meeting Doctors out of order... How can the Seventh Doctor not know who the Master is in future stories if he met him in his sixth life?