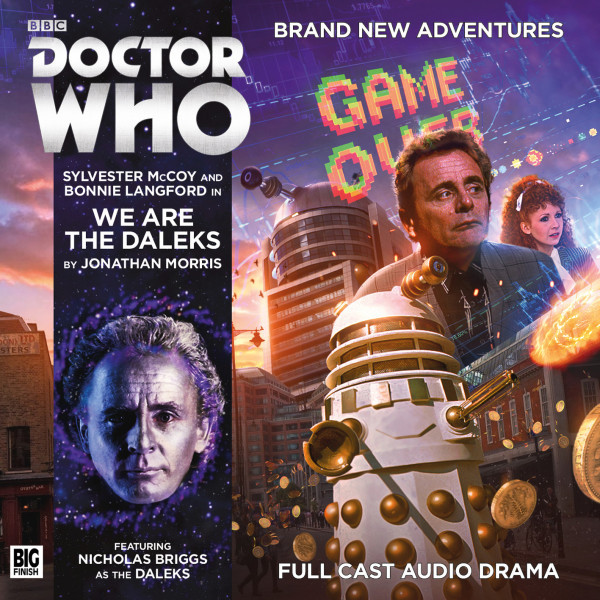 The year is 1987, and Britain is divided. In Bradford, strikers are picketing and clashing with the police. In the City of London, stockbrokers are drinking champagne and politicians are courting the super-rich. The mysterious media mogul Alek Zenos, head of the Zenos Corporation, is offering Britain an economic miracle. His partners wish to invest – and their terms are too good to refuse.

While the Doctor investigates Warfleet, a new computer game craze that is sweeping the nation, Mel goes undercover to find out the truth about Zenos’s partners.

The Daleks have a new paradigm. They intend to conquer the universe using economic power. The power of the free market!

'We Are the Daleks proves there’s nothing more entertaining in the Whoniverse than a couple of age old adversaries going head to head with the fate of Earth, and the galaxy, at stake. Absolutely smashing…' Tim MassMovement

'If you want to jump on board with Big Finish, then this is an excellent story to do so.' Fansided - Doctor Who Watch

'We are the Daleks is one of the most enjoyable, innovative takes on the Daleks for some time (both on TV and audio), as well as being an entertaining and thought-provoking Doctor Who adventure in its own right.' Doctorwhonews.net

Recorded on: 5th and 6th January, 2015
Recorded at: The Moat Studios

When Andrew Cartmel was interviewed for the job of Doctor Who script editor back in 1986, he said that his ambition in the role would be to ‘overthrow the government’. It’s a matter of some debate how successful he was in this ambition, but it can hardly be a coincidence that two years to the day after part one of Silver Nemesis was broadcast Margaret Thatcher ceased to be Prime Minister.

As is not uncommon with these stories, it all began with me failing to follow a brief. The brief was to write a story set in 1987 about the ‘Big Bang in the City. Stripy shirts and braces. The big contemporary thriller they never actually did at the time.” But for some reason I misread it as ‘the big contemporary political satire they never actually did at the time.” So what started out as a State of Play-type story became a story about the state of the nation.

A quick word about the term ‘satire’. People seem to think it just means topical humour, pointing out that Eric Pickles is overweight or that Russell Brand uses words he clearly doesn’t understand. Well, it can be that, but We Are The Daleks isn’t that sort of satire. It’s not supposed to be party political in terms of Labour versus Conservatives; if you want to interpret it in those terms, that’s up to you, but my intention was for it to be more universal. It’s not even about the 1980s – what would be the point, Andrew Cartmel has already forced Margaret Thatcher to resign – but about the world we live in now, and the moral compromises politicians of all parties are forced to make dealing with powerful multinationals, investment banks and oppressive regimes in a global economy.

But I don’t want the word ‘satire’ to create the wrong expectations. This story is not intended to be a comedy; if anything, it’s a black comedy. Science fiction being used for satirical purposes has a long and noble history – it could be argued that that was how it all started, with The Time Machine and War of the Worlds. There are funny bits, but please don’t go into it expecting a laugh riot!

Sometimes with these stories it’s easy to describe them in terms of other Doctor Who stories and works; ‘It’s Jeeves & Wooster meets The Androids of Tara’, ‘It’s Groundhog Day meets When The Wind Blows’. But in this case, I can’t really describe this story in those terms, because it’s not really like anything I can think of. It’s not a pastiche of 1987 Doctor Who. In my head, I think it’s a bit like one of Lindsay Anderson’s surreal black comedies, but it probably isn’t. Maybe if they’d let the Comic Strip Presents team take over Doctor Who in 1987 this is the sort of story they’d have come up with. Larger than life, but making a serious point.

Of course, I did that many years ago, with a story called Flip-Flop. This story is nothing like that one. It’s also – quite deliberately - nothing like Damaged Goods, a novel I recently adapted also set in 1987. If nothing else, I hope people listening to this story will be able to say “Well, it’s not like anything they’ve ever done before.”

So that was my other starting point, the idea that the Daleks are like us – and that if we act without compassion or conscience, we are the Daleks.

Little bit of politics, yes indeed. My name is Jonathan Morris, and goodnight.

We Are the Daleks proves there’s nothing more entertaining in the Whoniverse than a couple of age old adversaries going head to head with the fate of Earth, and the galaxy, at stake. Absolutely smashing…

If you want to jump on board with Big Finish, then this is an excellent story to do so.

We are the Daleks is one of the most enjoyable, innovative takes on the Daleks for some time (both on TV and audio), as well as being an entertaining and thought-provoking Doctor Who adventure in its own right.