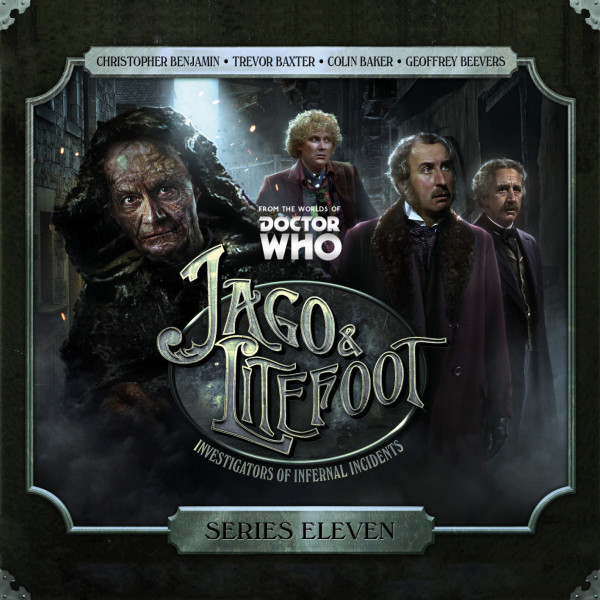 11.1 Jago and Son by Nigel Fairs
With missing persons, dead bodies and a Satanist cult to deal with, both Litefoot and Jago need help. Professor Litefoot finds himself working with Jean Bazemore, an old archaeologist friend. Jago, however, finds he is assisted by someone he never even knew existed - his own son. Or is he? Can Jago be sure of anything?

But there is more to events than the detectives know. An alien menace is stirring underground. Once again, Jago and Litefoot find themselves fighting for their lives...

11.2 Maurice by Matthew Sweet
As he tightens his grip on Inspector Quick, the Master becomes interested in the young composer Maurice Ravel. For his part, Ravel befriends Professor Litefoot. But is anyone truly who they seem or able to control their own destiny and actions?

When Litefoot goes missing, it’s up to Jago to investigate. But the Professor finds himself in a nightmare landscape where reality and fiction seem to have merged. Will he ever manage to escape? And if the real Maurice Ravel is trapped with Litefoot, who exactly is walking the streets of London?

11.3 The Woman in White by Simon Barnard and Paul Morris
The great actor Henry Irving is not as great as he once was. In fact, he’s awful - a shadow of his former self. Worried that something may be terribly wrong, Irving’s assistant Bram Stoker enlists the help of an old friend - Henry Gordon Jago.

With Irving’s state deteriorating, Professor Litefoot also faces a challenge. He performs an autopsy on a man who has had all his bodily fluids drained from him. Can the detectives discover the connection between the great actor and the mysterious dehydrated corpse? And how does it relate to the Woman in White who supposedly haunts Irving’s theatre?

11.4 Masterpiece by Justin Richards
The Master’s plan is nearing completion - and he is sure that Jago and Litefoot will help him bring it to fruition. With Inspector Quick increasingly under the Master’s influence, the Infernal Investigators find themselves tired and fatigued, as if their very life force is being drained away...

With the help of Ellie together with stage hypnotist Madame Sosostris and her assistant Mr Nocturne, Jago and Litefoot finally track down the Master. But as they make their way towards his lair, the Time Lord's true scheme is revealed.

Big Finish hits the spot with this exquisite collection.

Splendidly written and performed, Jago and Litefoot Series Eleven carries George and Henry’s legend, mythology and legacy on in grand and magnificent fashion.