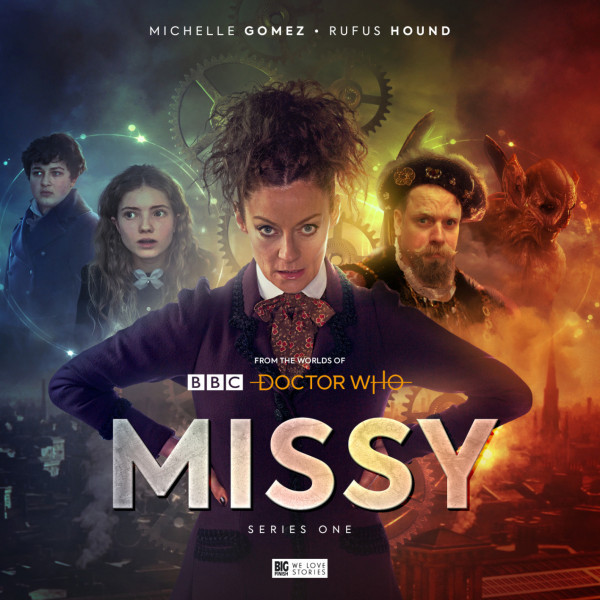 Well, Missy has a plan. And to carry it out, she’s going to have to break some rules. And people. And planets. Look out universe, Missy is on a mission. And nobody is going to stop her...

1.1 A Spoonful of Mayhem by Roy Gill

In a spot of bother in Victorian London, Missy is forced to take on governess duties.

But she has another scheme in mind, and her charges are simply in the way. She’s going to have to teach the children some rather harsh lessons about getting what you want.

And there will be tears before bedtime.

Missy arrives in Tudor England, throwing the plans of another renegade Time Lord into chaos.

King Henry VIII is on the throne, and aliens are stomping through the countryside. Missy just wants to be Queen.

And the Monk? Once he knows who else is on the scene, he’ll be glad just to stay alive...

1.3 The Broken Clock by Nev Fountain

Tonight, on Dick Zodiac’s America’s Most Impossible Killers, Detective Joe Lynwood hunts the most impossible killer of his career.

There’s a trail of bodies. Impossible bodies. And Joe has one long night to solve the case.

1.4 The Belly of the Beast by Jonathan Morris

Missy’s scheme nears completion. All she must do is subjugate one little planet and bend the inhabitants to her will. Not too much to ask…

But slaves will keep rebelling. It’s almost as if they don’t want to unearth an ancient artefact to fulfil Missy’s plans for universal domination.

She’ll have to do something about that.

Roy Gill: “A Spoonful of Mayhem doesn’t hide the famous story it initially pays homage to – from the moment Missy floats down from the heavens clutching her brolly (in TV episode Death in Heaven) the evil Mary Poppins imagery was heavily implied. Big Finish producer David Richardson wanted a Victorian-era story that would explore this surprising aspect of Missy, and I was happy to oblige.

“Missy would never tolerate the company of children for long, let alone a couple of teenagers (like my Oliver and Lucy Davis). She would need a reason to be where she was, a reason not to bump her meddling charges off, and a reason to delve into the world of dark magic – and everything would have to be underpinned with a Doctor Who-ish logic! With those factors in mind, I set about telling my story. I delved eagerly into a shadowy London, filled with secrets and strange, ancient creatures...

“E Nesbit – creator of The Phoenix and the Carpet – trod this sort of landscape even before PL Travers created Mary Poppins, fashioning a pioneering sort of Urban Fantasy in which magic lurked around every soot-stained corner (and monsters were usually sarcastic). In more recent years, writers like Neil Gaiman, China Miéville and Ben Aaronovitch (now where have I heard that name before?) have explored the landscape of hidden, magical London. It was an absolute delight to drop the chaotic and playful Missy into that world, and watch her connive a way back out… Better behave now, or she’ll be back to sort you out – just when you least expect it!”

“That’s all you need, isn’t it? What else do you want me to say?

"I’ve talked in the past how I often feel that writing a Big Finish script is like having the best seats in the house. You’re the first person in the world to hear these characters speak to each other. The first to find out what they have to say. And if you’re quick, you can write down what they say.

“When it’s any good, that’s usually because the characters and strong and distinct. Where the character and actor are aligned as one. Where they live in your imagination and the words just flow.

“And that’s true of Missy and the Monk. Michelle and Rufus have brought these two legendary characters to life so vividly and richly that really I just had to fling them into a room together and see what happened. I just had to get them talking. Listen. And take notes.

“So if you enjoy this, thank the two of them. It wouldn’t be here without them.”

Nev Fountain: “There are some characters you can only show through glass. The most dangerous predators. You can’t write a scene with them sharing a drink with another character, because half a page later that other character will inevitably be lying on the floor gargling their last breath because they’ve swallowed poison, or had the little umbrella stuffed down their throat.

“Hannibal Lecter is one. Darth Vader is another. And the Master/Missy is Doctor Who’s very own psycho-killer queen-king. Her focus should always be elsewhere, because if her focus is on you then you’re in trouble.

“So how to approach this problem? How to contain her and make her do what you want? How to make her leave the other characters alone for long enough to carry through a story that is dramatic, exciting and more than twenty seconds of chat-quip-cocktail-umbrella-aargh?

“Here’s a thought. Put her in a television show. Literally put her behind glass (or to be pedantic, behind a Liquid Crystal Display). Good idea. Then she’ll have to behave. Here’s a thought. Let’s make her a detective in a crime show. Force her to go through the conventions of investigating and tracking down a killer even crazier than her. What could be simpler?

“But it’s never that simple. Psycho-villains always manage to come through the glass somehow. There always comes that moment when they step through and stand beside you, say something cute, and everything goes to hell. Oh well, it was worth a try….”

Jonathan Morris: “One of my favourite lines from The Mark of the Rani is when the Rani cuttingly describes the Master’s modus operandi as, ‘It'll be something devious and overcomplicated. He'd get dizzy if he tried to walk in a straight line.' I think that sums up the Master – and Missy; when the Doctor isn’t around to thwart her she has to make her plans more complicated, just to keep it interesting. Think of them not so much as complications as curlicues of death, decorative twists to her signature. Why invade a planet and enslave its population in a boring way when you can do it in a fun way? Why not throw in some gratuitous suffering, purely for amusement value? It’s not enough just to have an evil plan. You have to go about things in an evil way or there’s a danger you might – when you’re not looking – accidentally end up not being evil at all.

“And that, in a roundabout way, is what The Belly of the Beast is about. It’s about what it’s like to be a pawn in one of Missy’s plans – and what happens when you realise you are a pawn in a game of four-dimensional chess. Because pawns can become queens and change the endgame... and even the best laid schemes of Missy and men have a habit of going awry. Sometimes, it turns out, Missy can be too devious and overcomplicated for her own good…”

Shop all audiobooks
Next release in this range: Missy Series 02