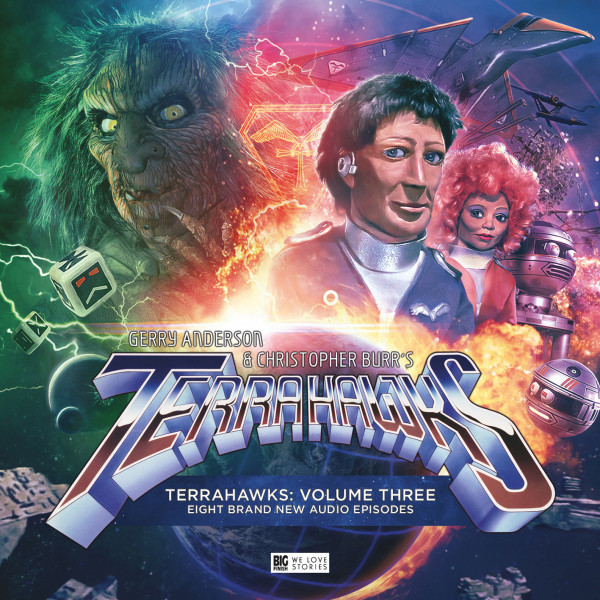 CD + Download
US $37.12
Buy
Download
US $30.93
Buy
Save money with a bundle Login to wishlist
10 Listeners
recommend this

“Terrahawks, stay on this channel...”

3.1 No Second Chances by Jamie Anderson

Zelda has pulled off the ultimate heist, and now her victory seems inevitable. To stop her, and against all the odds, at least one of the Terrahawks will have to make the ultimate sacrifice.

Leaderless and desperate, the Terrahawks turn to pun-meister Twostein. After his victory against Cy Splitter, the comedy clone's arrogance could prove royally problematic for Earth’s defenders.

Another mission - another clone. Sixstein is drafted in to service for an escort mission. Professor Otto Maddox’s new weapon is travelling via the Atlantic ocean, and Zelda is poised and ready to take piracy to new extremes.

3.4 You Foe by David Hirsch

It’s the last chance for the Terrahawks to replace their lost leader. But it becomes a race against time as Zelda and her family try to take advantage of the final clone, Threestein’s, good nature.

It’s time for Threestein’s first major mission, and he’s in for a treat - meeting one of his idols. But soon his encounter with galactic explorer Elias Crick proves that you should never meet your heroes.

3.6 The Prisoner of Zelda by Chris Dale

Threestein and Lois Price are kidnapped and taken to an unknown coastal location - where a bizarre village - The Community - becomes their prison. Where are they? Why are they here? Why are they all now addressed by letters rather than their names? And just who is the mysterious ‘Z’?

It’s a case of Cloneo and Juliet - and Threestein’s final chance to prove himself as a capable leader. But when it comes to matters of the heart can a Stein clone overcome his genetic shortcomings?

With both the androids and Terrahawks weary of the constant conflict and seemingly unending stalemate, a new approach is tabled. But will human (and android) nature allow the long-time enemies to settle their differences?

One of Terrahawks’ strengths is that it swerves the rather serious approach to the genre adopted by Captain Scarlet and Space: 1999 and straddles territory inhabited by the Andersons’ Stingray and even Red Dwarf. In short, it can take a joke. The series’ characteristic humour still abounds.

The final moments of the series are the greatest testimony to the achievements of Big Finish's Terrahawks audio adventures. They have taken the show in directions that no-one could have possibly imagined, trying all sorts of new and exciting format experiments to produce stories which not only break the mould of Terrahawks, but break the mould of what you can expect from a classic Gerry Anderson formula. If you like Terrahawks, you will love the Big Finish audios...