You are here
Tags : Events Doctor Who - The Tenth Doctor Adventures

Doctor Who Special ‘The End of Time’ comes to US movie theaters as a One-Night Event on August 7, celebrating the 10th Anniversary of David Tennant’s final season

US Listeners! This year marks the 10th anniversary of David Tennant’s final season with Doctor Who, and perhaps his greatest adventure of all time – the heartbreaking special The End of Time.

US cinema audiences have the chance to relive the agony and ecstasy of this thrilling story on August 7 only, with the return of many fan-favorite actors from David Tennant’s era as the Doctor: Billie Piper, Catherine Tate, John Simm, Freema Agyeman, Bernard Cribbins, John Barrowman, Elisabeth Sladen and more.

In addition to the feature content, fans will get an exclusive look at a brand new interview with David Tennant, in which he reflects on his time in Doctor Who and all that has come since.

Tickets for Doctor Who: The End of Time 10th Anniversary can be purchased at www.FathomEvents.com or participating theater box offices.

Fans throughout the US will be able to enjoy the event in more than 700 movie theaters through Fathom’s Digital Broadcast Network (DBN).

For a complete list of theater locations visit the Fathom Events website (theaters and participants are subject to change).

And don't forget, you can keep up with adventures starring the Tenth Doctor at Big Finish!

This five-disc collector’s edition – limited to 5,000 copies – is available on CD in deluxe bookset packaging for a pre-release price of £35, with the download version for £25. Included with the limited edition CD release, Doctor Who and Blake’s 7 costume designer June Hudson has created costumes for some of the creatures and aliens, and writer and SFX specialist Mike Tucker has created fantastic storyboards. With additional behind-the-scenes interviews from some of the cast and crew, including a one-hour special David Tennant at Big Finish, this limited edition makes for an unmissable audio package. 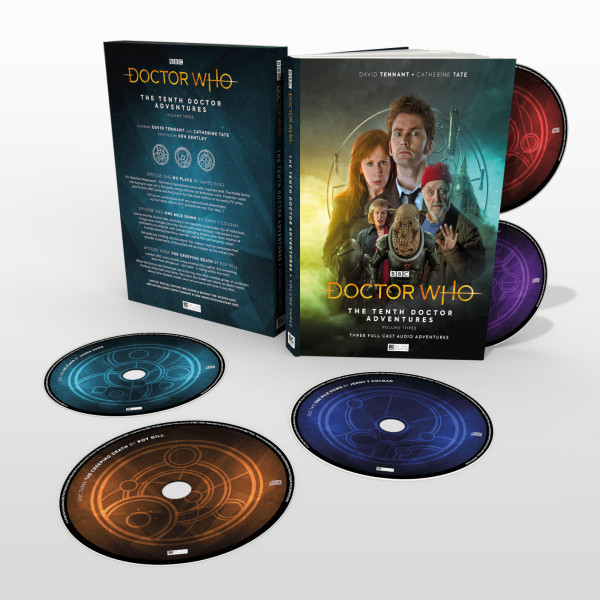 The three episodes, No Place, One Mile Down and The Creeping Death can also be bought individually for £8.99 on download and £10.99 on CD.

Or why not save more money and buy all three individual CDs together in a bundle for just £22 on download and £25 on CD.