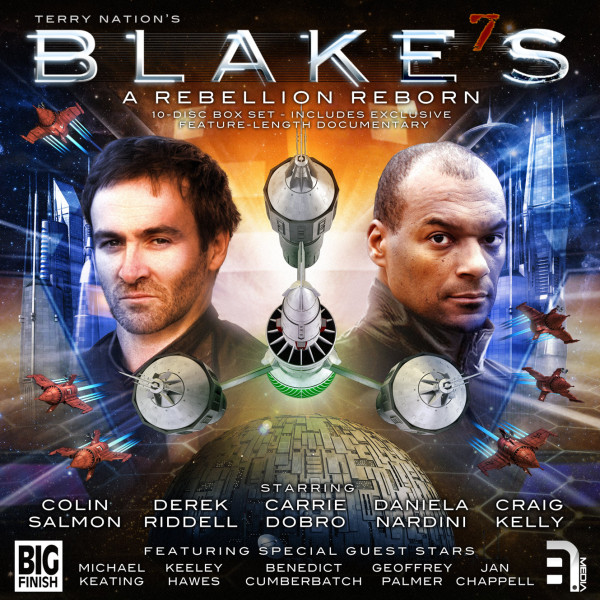 Blake's 7: A Rebellion Reborn brings together the epic trilogy Rebel, Traitor and Liberator with the complete collection of Blake's 7: The Early Years audio adventures, revealing the lives of the Liberator crew be before they encountered the freedom fighter Roj Blake.

Blake's 7 - The Audio Adventures: Rebel, Traitor and Liberator follow Blake’s incarceration; the forging of his legendary crew; and their capture of a mysterious alien spacecraft. On the run from the Federation, the crew of the Liberator fight back against a totalitarian regime personified by the manipulative Servalan and her loyal commander, Travis.

In the third century of the second calendar, the galactic Federation, once a beacon of democracy and peace, has become a corrupt tyranny. Freedom and Justice are things of the past.

Roj Blake stood up for ordinary people. When the establishment tried intimidation, he laughed in their faces; when they tried to crush him, he fought back. They tried to brainwash him into obedience, but he broke their conditioning. Finally, they framed him for crimes he didn't commit and sentenced him to permanent exile on the notorious prison planet of Cygnus Alpha.

Roj Blake is on the run... He has a ship, but the ship has plans of its own. He has a crew, but who are his friends and who are his enemies?

Blake thought space meant freedom, but space is cold, cruel and steeped in blood. The power of the Federation reaches further and deeper then Blake dared imagine... Freedom is nowhere to be found.

The Federation's grip is tightening and Roj Blake and the crew of the Liberator have nowhere left to hide.

As time runs out, old friendships are shattered and new alliances are forged. Choices are made and battle lines are drawn across the galaxy.

A path of betrayal, lies and deceit leads to only one destination... Toward a deadly confrontation that will change everything.

Covering the escapades of Avon, Jenna, Cally, Vila, Gan and Zen before they joined Blake’s rebellion and a pivotal moment in Commander Travis’s life, The Early Years series reintroduced the original cast and added many other impressive names to the world of Blake’s 7 on audio.

Earth. 2230 AD. A time of social and political turmoil…

Olag Gan wants to marry the woman of his dreams. Vila Restal wants to steal anything that isn’t nailed down.

When they form a partnership, a perfect combination of strength and skill, it seems that nothing stands between them and the easy life.

But fate hates to give a sucker an even break and the course of true love never did run smooth.

Point of No Return by James Swallow

London, in the year 2230. On the eve of a tense election that will send shockwaves throughout the Federation, Major Stefan Travis finds his liberty unexpectedly cancelled and a new assignment thrust upon him.

A key political activist and opponent of the government has been arrested, accused of hate crimes and incitement to violence, but a trail of murder and conspiracy leads Travis to doubt the truth presented. When a deadly terrorist atrocity looms, how far will he go to prevent millions of deaths?

Eye of the Machine by Ben Aaronovitch

Oxford University. It is the Freedom Spring of 2230 and the student campus is a hotbed of protests as Roj Blake’s Freedom Party seeks to sweep away a century of corrupt rule. Kerr Avon, a young man from the frontier, brilliant, ambitious and naïve, has arrived to make his mark on the future.

Avon is here to work with Professor Ensor, the Federation’s most brilliant cyberneticist. Avon has no intention of getting involved in politics – he may be naïve but he isn’t stupid – and then he meets Anna Grant, activist and girl about town, and all bets are off!

Blood and Earth by Ben Aaronovitch

Cally belongs to the Auron Unity, a society of clones. Fierce, militaristic and always under threat from the Terran Federation. A place of solidarity – or so the people are told – where Unity is paramount and individuals struggle to be heard.

Auron is a world of clones, where everyone is buoyed by the constant murmur of telepathic support, gossip and opinions. When Ariane Cally’s plane crashes in the middle of a wilderness park she finds herself cut off not only from rescue, but the voices that have sustained her all her life.

Her only hope is the mysterious Aunty, the single voice she can still hear, a woman who claims to have been the second Cally ever to be born on Auron. From Aunty she will learn the true and secret history of her people, but only if the wilderness doesn’t kill her first.

Flag and Flame by Marc Platt

Pilot Skate Cally and Operative Merrin Cally are a Flight Team on the Auronar cruiser Flag of Hope. They’ve been in each other’s heads, living each other’s lives, the same feelings, differences, orders and taste buds, since they were first poured out of a vat.

But after High Command sends Skate on a oneway mission investigating Federation incursions in the Dancer Cluster, Merrin faces a bleak new future on her own, uncovering the dark half of the sister she thought she knew.

The Dust Run by Simon Guerrier

Jenna Stannis has grown up as a spacer, where the normal rules don’t apply. No school, no police, no public imperatives – that’s still all to come. But the situation on Earth is changing and the effects are slowly being felt throughout the Vega system. It’s going to mean trouble for a brash boy called Townsend – who Jenna doesn’t fancy at all.

Soon Jenna and Townsend are competing in the Dust Run – racing shuttles through an asteroid field without using computers, making the complex calculations in their heads. It’s dangerous, foolhardy and really good fun. But they’re playing for the highest of stakes…

The Trial by Simon Guerrier

The election is going to change everything. A man called Roj Blake promises the voters new hope, an end to years of corruption. There are those who can’t let him be heard. But Jenna Stannis is determined to get his message out to the colonies.

It’s been years since the Dust Run, and Jenna’s a changed woman. She’s left the Vega system far behind, using her exceptional piloting skills to carve out a life as a smuggler. Blake’s message could earn her a fortune – or cost her her life.

The Liberator – a mysterious alien starship controlled by a synthetic intelligence known only as Zen. A derelict rescued from the brink of destruction by Roj Blake and his band of dissidents, the ship is their weapon in the war against the corrupt Federation, its origin unknown – until now.

What terrible catastrophe left the Liberator drifting and shattered? What drove the ship’s computer to murder its original crew? What dark secrets lie at the heart of this alien machine?

For one woman, a pilot in the service of the all-powerful System, these questions will be answered in a desperate search for her own identity…a search that can only end in betrayal and death.

Blake's 7: A Rebellion Reborn is a B7 Media Production

Shop all audiobooks
Previous release in this range: Blake's 7: Rebel