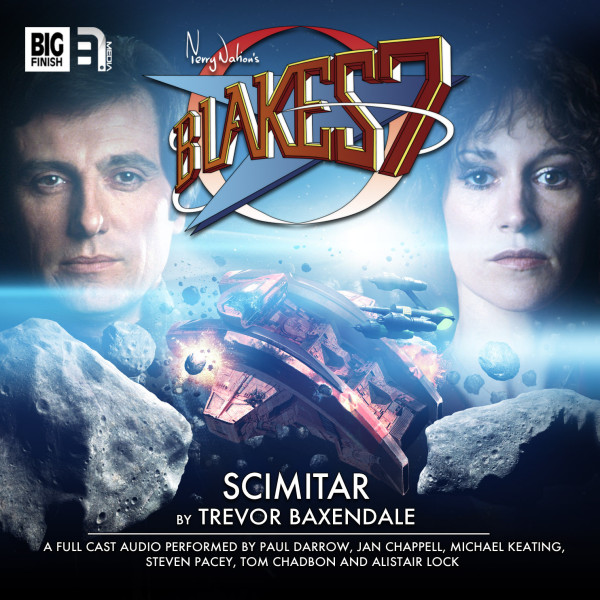 Download
US $6.18
Buy
Login to wishlist
7 Listeners
recommend this

The crew of the Liberator awaken to find one of their own missing. Where is Dayna? Has their friend been taken or has she deserted them?

The search for Dayna leads them to a deserted ship in the middle of a dangerous asteroid field.

But what is the secret of the Scimitar and can Avon get every member of his crew out of the asteroid field alive?

It's difficult to come up with a Top 5 moments in Blake's 7. There are too many to choose from, for a start. And Blake's 7 changes all the time. No two series are completely alike, and no one thing and no one person is indispensable, as proven in Star One and Terminal - and, of course, Blake. But there are important touchstones throughout the four year run, and a few in particular came to mind as I sat down to write first my novel Criminal Intent, and then the audio play Scimitar...

1. Trial - I love the Travis story in this. Nowhere in Blake's 7 is it made more clear that Travis sees himself as the hero. He's a soldier, an enforcer, a warrior. He is brutal and single-minded, certainly, but he is also courageous and - apart from his long, final fall from grace - completely loyal to the Federation. He sees Blake and his followers as criminals and terrorists. Travis's fight is therefore a war on terror - he sees himself as protecting the order and stability of his society against dangerous insurgents. I wanted to tap into this remarkable form of self-awareness in Criminal Intent, and consequently Travis is quite the anti-hero rather than out-and-out villain.

2. Duel - another great story for a different Travis. Stephen Greif is my fave Travis and his very personal contest with Blake, a microcosmic representation of Federation's struggle against rebellion, is a highlight. But the most arresting parts of this story are the scenes between Travis and his mutoid assistant, Kiera. Why has he taken the trouble to find out her original, pre-mutoid identity? Why does he then tease her with it? What is his fascination with Kiera? There's more to Travis than meets the eye...

3. Rumours of Death - because you can't talk about Series C of Blake's 7 without mentioning this episode. Chockfull of grit, menace, drama (and melodrama, because it's Blake's 7) this is a standout piece of television: one of its greatest strengths is its brutally taut storytelling and this is in no small way helped by starting the episode in the middle of the actual story. A swaggeringly confident script and production.

4. Powerplay - another taut and influential story, especially when I came to write my audio play Scimitar. All the scenes on the Liberator are so wonderfully tense, and a typical Blake's 7 situation when everything is in flux: Blake missing in action, the crew scattered, everyone trying to survive on their own terms. They're all survivors, but with Blake gone it's Avon's story that becomes the most compelling. The insertion of Dayna and Tarrant into the regular crew via their own unique and compelling introductions works so well. In Scimitar, Dayna is missing and Del Grant is a recent addition to the crew, so this episode from the TV series certainly felt relevant.

5. Series D - It's not fair to pick out a single episode from this, which, despite everything, remains my favourite season of Blake's 7. The final five episodes are a terrific run showing that the series could still produce outstanding scripts and was showing no sign of fatigue. That it ends everything on one of its finest, bleakest episodes, Blake, while still on a confident high and in the manner it does is one of the many, many things that makes Blake's 7 unique.

As the short animation below shows, artist and designer Grant Kempster started with an original sketch and then ‘built’ the Scimitar in Photoshop, using pictures of retro objects such as the Tomytronic 3D gaming device and a Sega Light Phaser gun controller. To these, Grant added photos of various model kits, combining them all to create the Federation’s newest warship. Before long, the Scimitar began to take shape. When completed producer Cavan Scott immediately told Grant that he loved it, but it needed “roughing up as much as possible!”