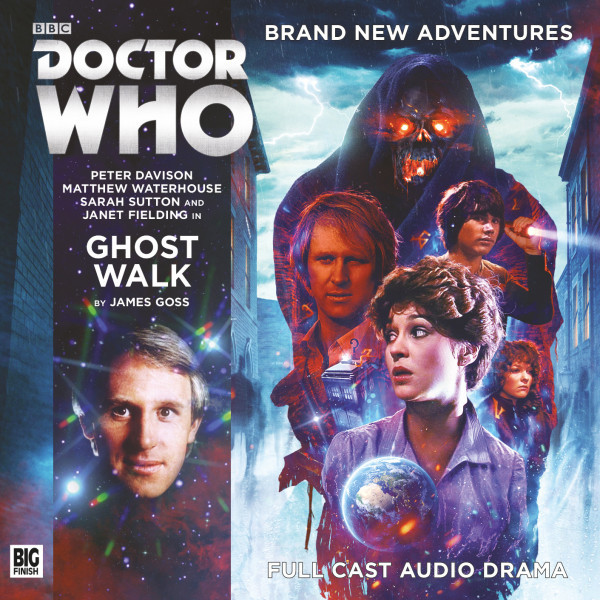 10/10 "Ghost Walk is written with style and purpose. The departures from traditional narrative propel this adventure into one that will, no doubt, go down as a 5th Doctor must. It’s creepy, tense and full of atmosphere with dashes of humour." - Blogtor Who

"If ever there was a Big Finish story ideal for TV adaptation this is it. Perfectly capturing the Fifth Doctor’s time and the companions shine" Tin Dog

“James Goss executes one of his trademark rug pulls with a shocking, game-changing cliffhanger… Ghost Walk is a restless puzzle box of a story built on ever shifting sands, Goss unpicking a spaghetti tangle of plot threads with Mofffatian glee.” Doctor Who Magazine

"a clever, tense story … that has lashings of atmosphere, pace and characterisation, especially from Fenella Woolgar as Leanne." Planet Mondas

"10/10 Ghost Walk is as good as they're saying and these two plays mark the most astonishing highs which the main range has reached in years, and that's not an exaggeration. Long may it continue." Doctor Who Online

"Fenella Woolgar gives an immense performance… With a true sense of danger building throughout that is accentuated by eerily effective sound design, this is another strong release for Big Finish’s burgeoning 2018 Doctor Who lineup" Doctor Who Reviews

"Paranormal and legend is a concept intertwined throughout English history so it would only make sense for Doctor who to have a say in the matter. Exemplary sound design partnered with a haunting narrative" The Host Productions

"It is dripping with horror and tension; cold, ghostly hands, strange noises, characters split up in the darkness. It works perfectly in the audio setting...the rich tapestry of storylines and a strong lead in Peter Davison make this one of the best main range releases in the last twelve months." The Digital Fix

"Ghost Walk is a tightly plotted, ingenious story; with sufficient twists and turns for the most wimey of timey fans" Indie Mac User

9/10 "Ghost Walk is an evocative story, challenging some of the tropes of the show but without fuss and in a production packed with superb actors and excellent direction from Barnaby Edwards." Starburst

This is a city of ghosts and no-one knows them better than Leanne. Twice a night she leads tourists to visit the most haunted sites - the Hanging Yard, the Witch Pool, the Screaming House, and, of course, the Catacombs.

Leanne’s realised the ghosts of the city are real. Something’s lurking in the Catacombs - an ancient force that has been growing in the darkness for centuries. Sabaoth is returning and they must be stopped before they devour the world. Leanne knows this, because a ghost told her.

A ghost called The Doctor.