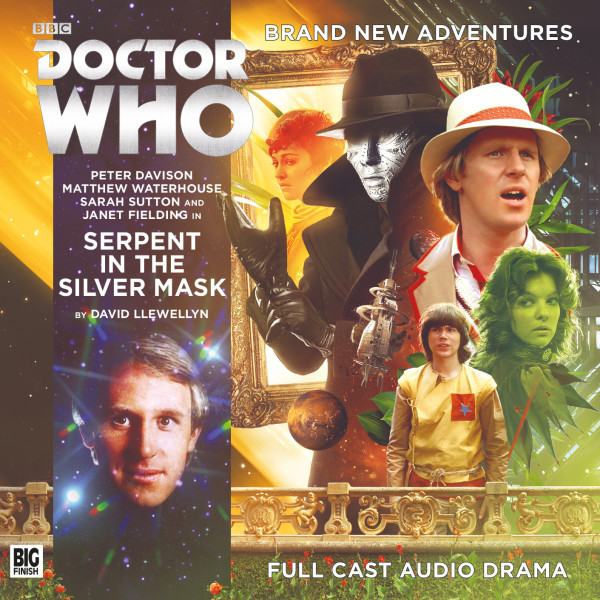 236. Doctor Who: Serpent in the Silver Mask

Can the Doctor, Nyssa, Tegan and Adric apprehend the murderer before Argentia – and everyone on board - is forever cut off from the rest of the Universe?

It finds the perfect balance of plot, characterisation, mystery and fun. If you enjoy the lighter Davison episodes like Black Orchid, then you’ll love Serpent in the Silver Mask. If you’re not a fan of lighter stories, this tremendously fun adventure is still worth a listen for Sam West playing an entire family at once. 10/10

When you have a whole TARDIS team at your disposal, it only makes sense to do a Scooby-Doo style murder mystery, complete with a culprit 'under the mask' reveal to finish.

Another classic film inspires a terrific Doctor Who audio tale. 9/10

The whole thing is tremendous fun and the producers are to be applauded for taking a risk. In less assured hands this could easily have ended up as an embarrassing farce. Serpent is, however, a triumph.

The TARDIS crew are on fine form here, not one of them sound a day older than they did thirty-six years ago – there must be something in the Argentian waters.

Serpent in the Silver Mask is a delightful little murder mystery, with some intriguing sci-fi twists, black humour and plenty of drama for the Doctor and his companions to get their teeth into. Samuel West is terrific.

(David) Llewellyn has crafted an exemplary script with a central mystery that genuinely surprised me.

If you have yet to try the Big Finish main range then this may well be a good introduction to it. This is a fun, rollicking tale that will keep you guessing until the final reveal. Well worth a listen.

It’s a joy, this story. It’s the kind of story you want to finish, and then loop straight back to the beginning to listen to again.