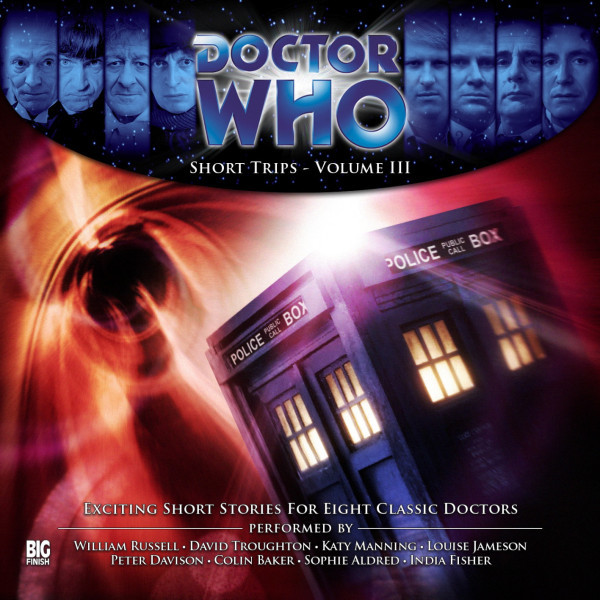 Download
US $9.66
Buy
Save money with a bundle Login to wishlist
11 Listeners
recommend this

Seven to One by Simon Paul Miller
Read by William Russell and Nicholas Briggs
Seven Doctors... one tricky situation. Will the First Doctor be able to save his future incarnations from a deadly trap?

The Five Dimensional Man by Kate Orman
Read by David Troughton
A Fifties housewife gets more than she bargained for when she offers to help a strange girl who appears in her kitchen.

The Wondrous Box by Juliet Boyd
Read by Louise Jameson
The Doctor and Sarah Jane pay an ill-timed visit to PT Barnum and The Greatest Show on Earth.

Wet Walls by Mathilde Madden
Read by Peter Davison
The walls of a manor house are dripping wet at night. But why can only mad Lady Catherine – and Peri – see it?

Murmurs of Earth by M Deacon, J Middleton and C Wraight
Read by Colin Baker
Peri's life is in danger when she and the Doctor land on a planet populated with mysterious holograms…

The Riparian Ripper by Andrew Cartmel
Read by Sophie Aldred
The Doctor and Ace investigate a series of terrifying slasher attacks along the banks of the Red River.

All the Fun of the Fair by Bev Conway
Read by India Fisher
‘Welcome to the future. Step right up for the trip of a lifetime! Yes, madam, I know it says Police Public Call Box but that’s just by way of a bit of disguise…’