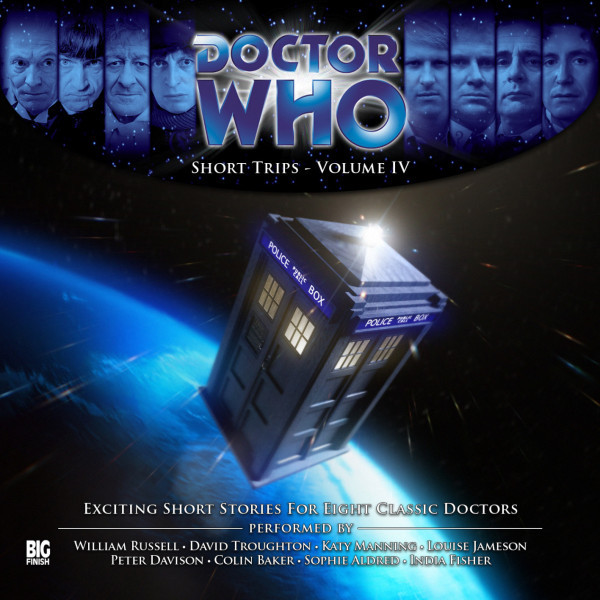 Download
US $9.75
Buy
Save money with a bundle Login to wishlist
12 Listeners
recommend this

A Star Is Born by Richard Dinnick
Read by William Russell
The Doctor and his companions answer a distress call from a vast spaceship carrying the remnants of a dying race...

Penny Wise, Pound Foolish by Foster Marks
Read by David Troughton
Showing too much interest in a mining operation on an almost deserted planet leads the Doctor and his companions into danger.

Lost in the Wakefield Triangle by Vin Marsden Hendrick
Read by Katy Manning
The Doctor and Jo find trouble in the most unlikely of places when they stop off to buy some West Yorkshire rhubarb...

The Old Rogue by John Grindrod
Read by Louise Jameson
Romana and the Doctor pay a visit to Arkinen, Destroyer of Galaxies, who is working in a cafe in Catford.

The Lions of Trafalgar by Jason Arnopp
Read by Peter Davison
Panic ensues when stone lions come to life in nineteenth century London... and the Doctor is stuck on the top of Nelson's column.

To Cut a Blade of Grass by Cindy Garland
Read by Colin Baker
The Doctor visits an old friend, Walter Wibberley, in his hospital bed for the last time.

The Shadow Trader by Charles Williams
Read by Sophie Aldred
Salim finds he's picked on the wrong girl when he tries to steal Ace's shadow in a space-shipyard on a lonely planet.

Quantum Heresy by Avril Naude
Read by India Fisher
In the stillness of the archives, amongst the dust and data, a creature from another reality is trying to break through...