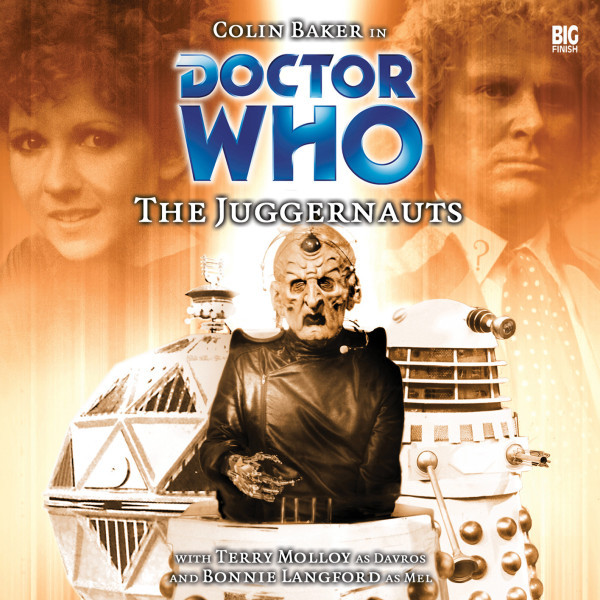 065. Doctor Who: The Juggernauts

In a small mining colony on the dark and distant planet of Lethe, events are occurring the results of which could dramatically affect things on a universal scale. For within the dingy corridors of the artificial biosphere, the lone survivor of a devastating crash has expertly wormed his way into the lives of the colony's personnel. A scientist known as Davros.

Separated from one another across space and time, the Doctor and Mel find themselves in very different predicaments: Mel has been employed on Lethe, while the Doctor has been imprisoned aboard an alien spacecraft. Both situations are inexorably linked, however, and at the apex of the two sits Davros and the terrifying possibility of a new threat even more powerful than the Daleks!

Rescuing Mel and stopping Davros should be the Doctor's primary goals, but could it be that this time, Mel does not wish to be rescued? And might Davros actually be working on something for the benefit of the civilised galaxies?'

THIS TITLE IS NOW OUT OF PRINT ON CD

THE JUGGERNAUTS
The writer of the story was American Scott Alan Woodard, who was commissioned by then-producer Gary Russell. Scott recalled: “The initial brief went something along the lines of: ‘We’d like a story featuring Colin, Bonnie, Daleks, Davros and the Mechonoids from The Chase.’ With a laundry list like that, how could I possibly resist?”

Some people find it hard to write for the Daleks – how did Scott find it writing for Daleks and the not-so-expressive Mechonoids? He smiled: “It’s a bit challenging, but not really that difficult. I did read every single line of dialogue aloud to ensure that they sounded suitably ‘Dalek.’ There were definitely lines that I originally wrote for them that were completely rewritten after reading them aloud. You can’t (and shouldn’t) give Daleks words with too many syllables! It should always be clipped, short, bursts of dialogue. Too many syllables and you’ve lost the word by the time the Dalek reaches the full stop!

“Mechonoids are an entirely different beast. They are far more primitive and I had to go back to their appearance in The Chase and listen closely to the way they spoke, the words they spoke, and the number of times they repeated said words. I also had the John Peel novelisation handy, along with a few collections of Classic Comics for more inspiration. Ultimately, whenever I write something based on a TV show, I go to the source material, so the original serial was my main source for their patter and I watched it repeatedly (taking copious notes).”

As well as voicing the Daleks, Nick Briggs did the Mechonoids too. Nick said: “The Mechonoid voices for The Juggernauts were a product of great post-production. I just spoke the words very slowly and clearly to give Steve Foxon something to play with, and he did the magic, after listening to The Chase. Sounded very authentic, though, didn’t it? Clever chap, that Steve Foxon!”

Steve added: “I seem to recall Nick did try something in the studio using the same effects he uses for the Daleks, but nothing was sounding right, so he left it for me to figure out in post-production. It took quite a while, as everything I was throwing at it didn’t work. I am not sure how I came to use this particular plugin – but I ended up with Audio Arpeg by Analog X, which basically allowed you to arpeggiate audio – faders allowed you to change to volume of audio in stages. So I just completely zeroed the level of every other fader and there I had the stuttering sound! A touch of ring modulation and pitch shifting up then finished it off nicely.”