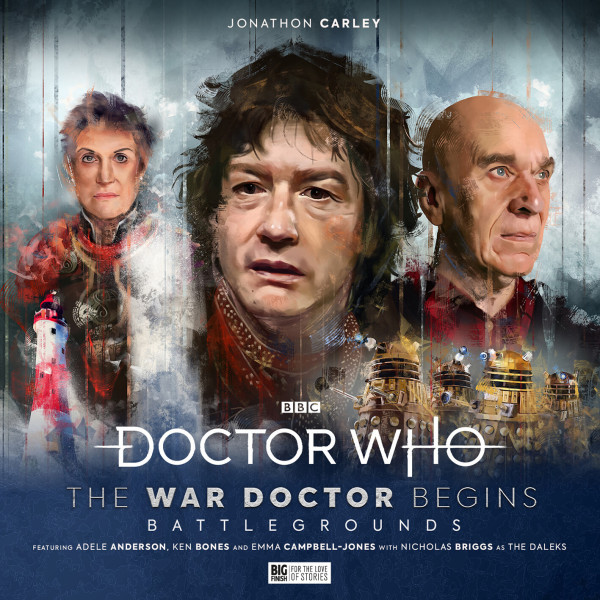 CD + Download
US $24.10
Buy
Download
US $20.49
Buy
Save money with a bundle Login to wishlist
27 Listeners
recommend this

The Doctor is no more.

In his place, a warrior, finally joining the Time War between the Daleks and Gallifrey. But how far will he go to end the conflict? What lines will he cross?

How much of himself will he sacrifice? The War Doctor is beginning to find out who he is...

3.1 The Keeper of Light by Phil Mulryne
The Doctor and his faithful companion are on the trail of strange psionic signals...

At a remote costal cottage, holidaymakers David and Dorothy think there’s something strange about the lighthouse. But the Doctor can’t shake the sense of an even bigger mystery to solve...

3.2 Temmosus by Rossa McPhillips
Fighting alongside the Time Lords against their common enemy, some Thals have realised that this collaboration is not between equals.

When his new battleship is stolen, the War Doctor must convince his old allies that they are on the same side.

3.3 Rewind by Timothy X Atack
Lacuna is on the brink of destruction, attacked by a new breed of Dalek. But every day, it is pulled back from that brink, and everyone prepares to live through the end of their world once again.

One strange man, alone in his castle, holds the key to Lacuna’s ultimate salvation - or its annihilation. The War Doctor Begins: Battlegrounds while not always going down the routes people might have been expecting is brilliant at tying together three stories based on a united theme... Battlegrounds gets down to brass tacks with the way war affects people, continuing to excel at what this range has been best at. 8/10.

It's not just Carley who has gone from strength to strength. Battlegrounds proves that the range has done so, exploring the idea not just with the Time War itself but in different ways thematically.

This set should be applauded for being experimental with its overall approach...