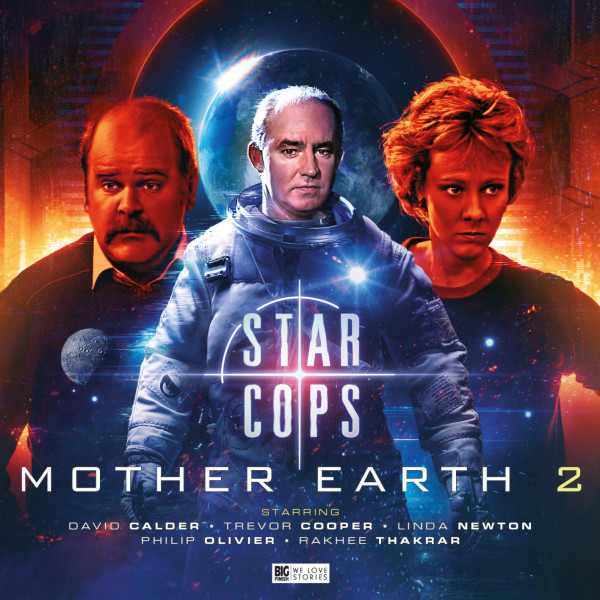 CD + Download
US $42.90
Buy
Download
US $36.77
Buy
Save money with a bundle Login to wishlist
25 Listeners
recommend this

It’s been months since the last attack by Mother Earth, the activist group opposed to mankind’s expansion into space. It’s believed that the group is finished. But instead, Mother Earth is about to renew its campaign. This time with even more ferocity and violence.

1.5 Dead and Buried by Guy Adams

At Lunar Interments, the moon’s graveyard for the wealthy, the caretaker has noticed something odd in the burial records. Odd enough for him to call in the Star Cops.

Devis isn’t happy at being assigned to what he thinks is a mundane case. Not when Nathan and Kenzy are off to investigate a burglary at the home of billionaire businessman Ben Alexander. A break-in where the burglar has finished up dead.

But in the lunar resting place of the dead, Devis will find himself racing against the clock to save his life and hundreds of others.

1.6 The Killing Jar by John Dorney

The Charlie Chaplin is a second-hand space station operated as a space-tourism hub by entrepreneur Martin Thane. When Nathan receives reports that serious accidents and even a death have been caused by Thane flouting safety laws, he decides to investigate.

An accident investigation soon becomes a murder enquiry. And as the Star Cops hunt for the killer, the station becomes a death trap threatening everyone on board.

A friend of Kenzy’s on the space station Coral Sea has been dismissed for possession of alcohol and sent back to Earth. She believes his claim that he was framed, and when she learns of his subsequent suicide she and Devis travel to Australia to investigate. A difficult enquiry is not helped when Kenzy’s former fiancé, a Police Superintendent, appears on the scene.

On Moonbase, Nathan is expecting an official visit from a powerful dignitary. So it’s not a good time for there to be a fatal incident that may be the work of Mother Earth...

The Star Cops are under intense pressure in the face of continuing Mother Earth attacks. The very existence of the International Space Police Force is in jeopardy.

Kenzy and Priya are responding to a murderous Mother Earth explosion at a moon outpost when one of the workers, Mary Ward, takes a hostage and makes demands, accusing others of trying to kill her. She appears to have snapped under pressure.

As the crisis develops, dangerous secrets are revealed. Secrets that some will be prepared to kill for. And die for.

When we meet them, PAUL BAILEY (Philip Olivier) is an undercover officer with an Earth force, and PRIYA BASU (Rakhee Thakrar) is the resident Star Cop on the Indian Space Station Rakesh Sharma. Joining them is SHAYLA MOSS (Nimmy March), the newly appointed Moonbase Co-ordinator.

Listen in to learn more...