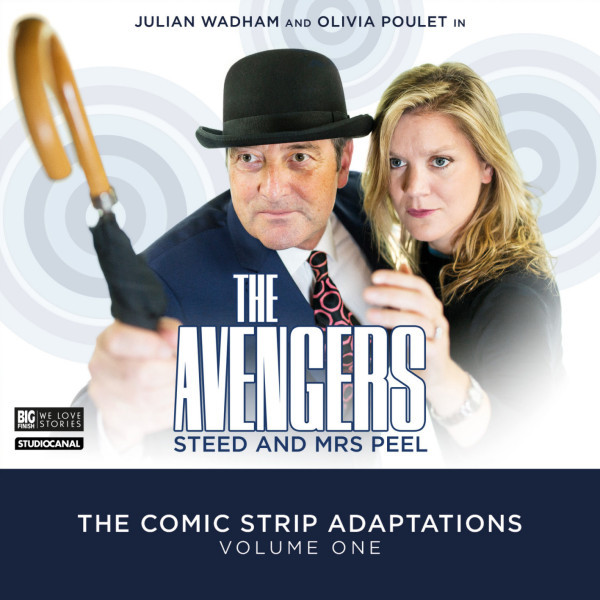 Recreations of the comic strip adventures of Steed and Mrs Peel which appeared in Diana magazine in 1966 and 1967.

1. Return to Castle De'ath by Simon Barnard and Paul Morris

Steed and Peel return to the scene of an earlier adventure to find it much changed. Now a ski-resort, Castle De'ath is playing host to many new visitors - including a wealthy Prince targeted by assassins. Assigned as bodyguards, the Avengers have to keep the Prince alive and discover which of the Castle's guests are behind the murderous plot - before they succumb to it themselves.

2. The Miser by Simon Barnard and Paul Morris

Steed has a nasty scare, Emma has a pressing engagement

When the phrase 'sleeper train' takes on a very literal meaning, Steed and Peel witness the first action of The Miser, a terrifying extortionist. The race is on to stop his ambitious scheme - but in this case, appearances can be deceptive.

3. The Golden Dresses by Paul Magrs

The ladies of society can't get enough of Madame Zingara's Golden Dresses. Especially now their husbands have gone missing. Steed and Peel look into the world of haute couture to discover the dark secret of this latest craze. Can they pull it off with style?

4. The Norse Code by John Dorney

Steed has the horns of a dilemma, Emma milks her moment.

An agent has gone missing whilst holidaying in the Norfolk Broads. With an American nuclear bomb being stored in the region, Steed and Peel can't take any risks. But the last thing they expect to find on their boating trip is a Norse longboat. What are Vikings doing in East Anglia?

'It’s very late night on Channel 4 in 1982 again (oh alright, early evening in 1966 for those who weren’t three or less at the time), as the Bowler Hat and Leather Booted pair make a very welcome return in this excellent opener. 9/10' - Sci-Fi Bulletin

'Now excuse me whilst i furl my brolly, crack open a bottle of Bollinger 1934 and award this exceptional box set 10/10 – Mrs Peel, were needed and with this sort of quality I hope that Wadham & Poulet are needed for a VERY long time.' - Planet Mondas

'Steed is suave, Peel is an action hero, fully capable of besting any number of petty thugs, and life is sunny afternoons, open top cars and enjoyment. Happy days!' 5/5 - Cultbox

Next release in this range: The Avengers: The Miser (excerpt)