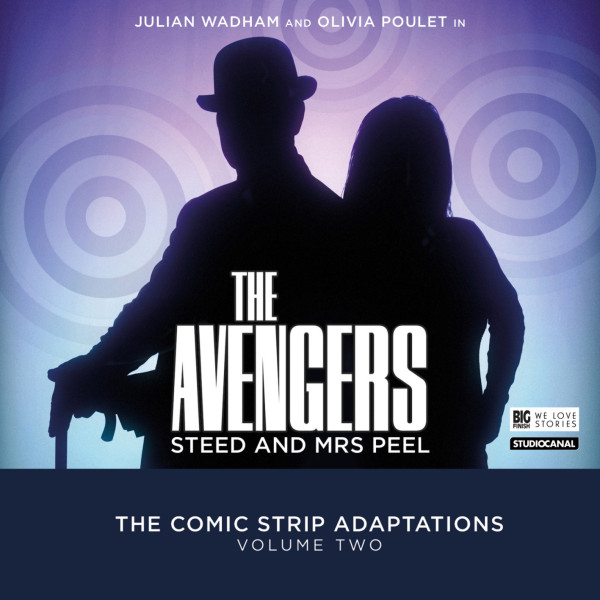 CD + Download
US $36.00
Buy
Download
US $25.00
Buy
Save money with a bundle Login to wishlist
14 Listeners
recommend this

Recreations of the comic strip adventures of Steed and Mrs Peel which appeared in Diana magazine in 1966 and 1967:

2.1 Playtime is Over by Robert Khan and Tom Salinsky
Steed gets toyed with, Emma has an admirer.
A series of impossible robberies have plagued London. Called in to investigate, Steed and Peel find themselves up against some very deadly children. Or do they?

2.2 The Antagoniser by Paul Morris and Simon Barnard
Steed catches a bite, Emma is a little cowed.
Several noted scientists have died in unusual circumstances, and Steed and Peel find themselves up against a deadly weapon. But who is behind it? Does an old TV broadcast hold the answer?

2.3 The Mad Hatter by Matt Fitton
Steed charms a princess, Emma buys a hat.
When Princess Helga of Varania comes to England, all the nation is charmed. Well, nearly all. A dastardly assassination plot is being prepared and only Steed and Peel can stop it. Who wants to be a milliner?

2.4 The Secret Six by John Dorney
Steed hits a boundary, Emma shall go to the ball.
When an invitation to a fancy dress party leads to murder, Steed and Peel face the fight of their lives. The world’s six deadliest criminals want them dead - and will stop at nothing to make sure of it!

... wonderfully silly, jam packed with knowing, self-deprecating and reverential humour, these are the kind of stories that you lose yourself and all track of time in. The writing is spot on, Olivia Poulet and Julian Wadham are absolutely splendid... the supporting cast do a first-class job... In fact, it’s all rather magnificent and jolly good fun.

...perfectly recreating the style and tone of the Steed and Peel era of the show. Even the distinctive incidental music is lovingly reproduced by Alistair Lock... Julian Wadham and Olivia Poulet should also be commended for capturing the characters' sparky rapport without descending into impersonation or parody.