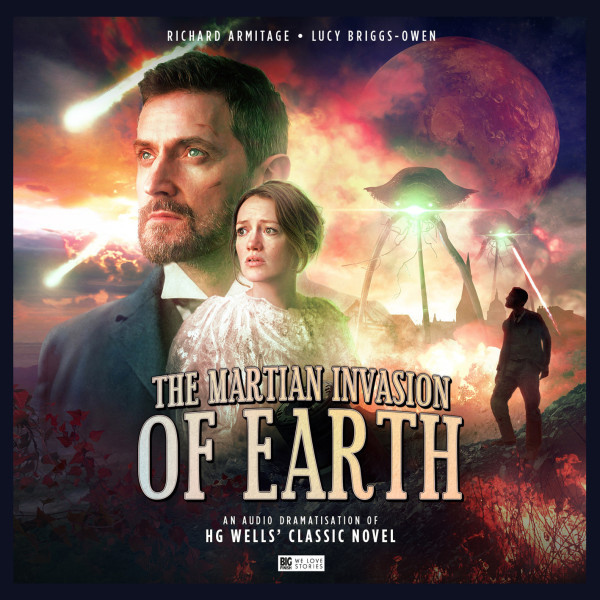 14. The Martian Invasion of Earth

Download
US $16.00
Buy
Save money with a bundle Login to wishlist
21 Listeners
recommend this

'No one would have believed in the last years of the nineteenth century that this world was being watched keenly and closely by intelligences greater than man's...'

A curiosity falls to Earth on Horsell Common, and a nightmare begins. England is laid waste by huge fighting machines, armed with devastating heat rays. Humanity brings its own weapons to bear upon the invaders, but can they be any match?

Trapped in a war of two worlds, one couple battles to survive. Herbert and Amy bear witness to... The Martian Invasion of Earth.

Recorded on: 7th-8th October 2017
Recorded at: The Moat Studios

This rendition of the Martians is a primal gut punch straight to the subconscious.

Pick up The Martian Invasion of Earth for the rock solid performances, the love shown to the original story, and the faith it keeps with that story, shaking the certainties of a civilised world.

The Martian Invasion of Earth is a tribute to the skill of Big Finish Productions and the wonders of the novels of HG Wells that should delight with repeated listens. 9/10

A fine envisioning of Wells’ story and a strong end to the line – for now. 9/10

Bravo to the writer and director Nicholas Briggs who adapted the novel and has thought carefully how to make this drama relevant to the modern world. This is a fitting update of Wells with a great awareness that this is no simple war story.

The cast are all compelling in their roles, with Richard Armitage showing the capabilities he has brought to his many audiobooks and documentary narrations. It’s a highly recommended release and a superb conclusion to this exceptional run of HG Wells stories. 5/5

A visceral, engaging, even at times horrific take on the HG Wells' classic. From Briggs' adaptation that is at once faithful but also refreshingly new to a solid cast and a cinematic soundscape, it is everything one could ask from an adaptation of The War of the Worlds.