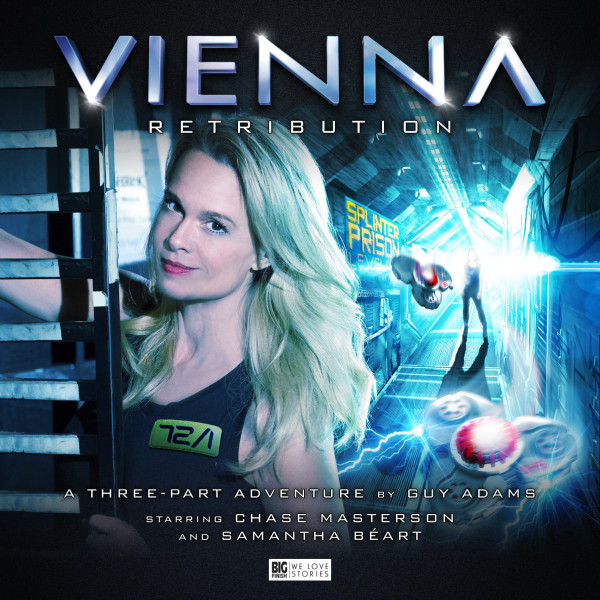 “Does the prisoner have any last words?”

Vienna Salvatori used to be a dangerous woman.

Vienna Salvatori used to be an assassin.

Vienna Salvatori has changed her ways.

After setting up a detective agency with her partner Jexie Reagan, Vienna has left her dark past behind her. Together, they bring villains to justice and right wrongs. Together, they are a team. But all that changes when a woman is killed in cold blood and Vienna is charged with the murder.

Vienna is sent to a hellhole of a prison with no hope of parole or release. But not all is what it seems on board the Splinter. With no means to escape, and no idea who she can trust, can Vienna survive life on the inside?

"For those who haven’t listened to anything with Vienna, ‘Retribution’ is the time to change that. Chase Masterson is just superb. From her very first scene she expertly brings Vienna to life. The writing is top notch and, over the course of three episodes, Guy Adams weaves a brilliant tale that director Scott Handcock effortlessly brings to life. 9/10" Blogtor Who

“Clever, funny, nasty and morally complex, this is the best season of Vienna so far. It’s also a great entry point so if you want a story you can get your teeth into, start here. 9/10” SciFi Bulletin

"In some ways this set is the audio equivalent of a classic 2000 AD comic strip, all vivid action, extraordinary characters, rich settings and tucked away those flourishes that lift the work beyond the good into the brilliant." Cultbox

"Vienna: Retribution is not simply an absolute blast; it’s a sharp, smart story that deals with very pertinent issues, such as the nature of justice and the reform of our penal systems. And it’s the lack of absolutes in this story that make it so riveting: when you’re only dealing with shades of grey, you never know which way things are going to flip-flop next. This is one you definitely don’t want to miss." MassMovement

Shop all audiobooks
Previous release in this range: Vienna Series 03