More details and the cover art for the first of next year's Short Trips are out now. Short Trips is a range of monthly short stories read by an original Doctor Who cast member - and at just £2.99 each, they're a bargain!

In the first Short Trips release of 2019, Leela meets Brigadier Lethbridge-Stewart in the Fourth Doctor story, The Revisionists. Written by Andy Frankham-Allen, The Revisionists is narrated by Louise Jameson who plays Leela.

Guests at the Hôtel des Rois are being haunted by ancestors that never existed. The Brigadier was only in Geneva to finalise his retirement, but how could he resist? Investigating, the Brigadier quickly finds something unusual. A warrior in leathers. A warrior called Leela…

History is about to catch up with both of them. History that neither of them thinks is real. 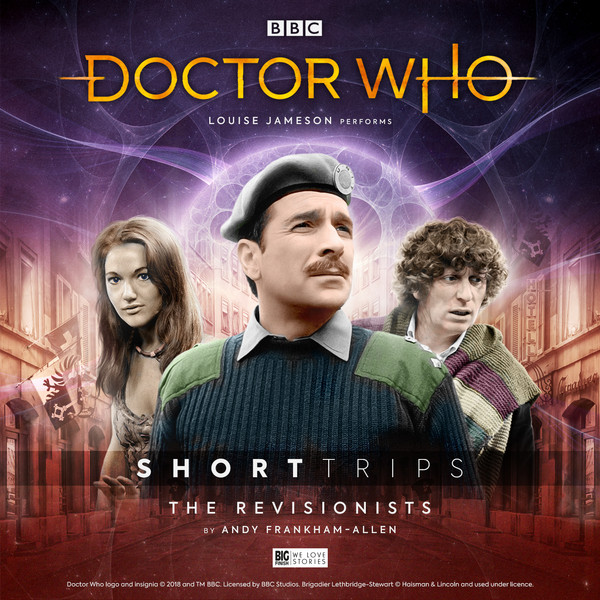 In February there’s a Twelfth Doctor (a first for Big Finish) historical tale that sees him meeting a female pioneer of literature. The Astrea Conspiracy has been written by Lizbeth Myles with narration by Neve McIntosh who plays Madame Vastra.

The conspirators sit in Antwerp, plotting to kill King Charles the Second. Aphra Behn’s mission is simple, get former lover William Scot to turn against his treasonous comrades. But her money is running out and the complications don’t stop there. A strange Scottish man arrives at her inn with troubling news.

William Scot is out and the Doctor is in.

Madame Vastra will also be returning in our special celebratory release, The Eighth of March and in a new range, The Paternoster Gang.

The Seventh Doctor – master strategist that he is – will be playing the most deadly game of all of his lives. Reya always knew she was different. Only she could see the numbers that govern the universe. When her sister is poisoned, Reya quests for the only substance that can save her. The blood of the last dragon. All that stands between her goal is a strange little man called the Doctor. He’s refusing to let her kill the dragon, even though it will save her sister.

Defeat the Doctor, kill the dragon, save her sister. What could be simpler?

And in April’s release we’ll finally find out how the Doctor learnt Venusian Aikido! Year of the Drex Olympics is a Second Doctor story written by Paul Ebbs and narrated by Frazer Hines who plays Jamie McCrimmon.

All the Doctor wanted to do on Venus was learn their aikido. But as ever, his plans have gone awry. The TARDIS has been stolen to be a prize in the Venusian Olympics. The Doctor is furious, not only at the theft but also that it is the third place prize! Jamie and Victoria compete to win TARDIS back, but soon find themselves winning every event.

The TARDIS crew normally win, but this time it might cost them everything…

Alfie Shaw, the new producer of the Short Trips range, tells us more: “Short Trips is a range that succinctly showcases the inherent flexibility of the format of Doctor Who. From comedic stories to heart-breaking character studies to more action orientated pieces, and from the First Doctor to the Twelfth, there really is something for everyone! All our writers, whether returning or new, have created beautiful scripts and I’m looking forward to getting them out to the listeners.

"To tease you with what’s coming up between now and December 2020 more directly, the Eleventh Doctor reunites with an old friend, there’s an unsolvable conundrum for the Ninth Doctor and the Third Doctor witnesses the impossible.”

Doctor Who Short Trips series 9 and 10 are both available for pre-order now at £2.99 an episode on download. Or why not save money by ordering a year's bundle of 12 episodes for download at £30.

Stay tuned as we’ll be confirming the details later this month for next year’s The Paul Spragg Memorial Short Trips Opportunity.