The third audiobook of our trilogy of Star Trek novels is available now. Narrated by Alec Newman, In the Heart of Chaos is the English translation of the original German novel.

Star Trek Prometheus: In the Heart of Chaos is out now. 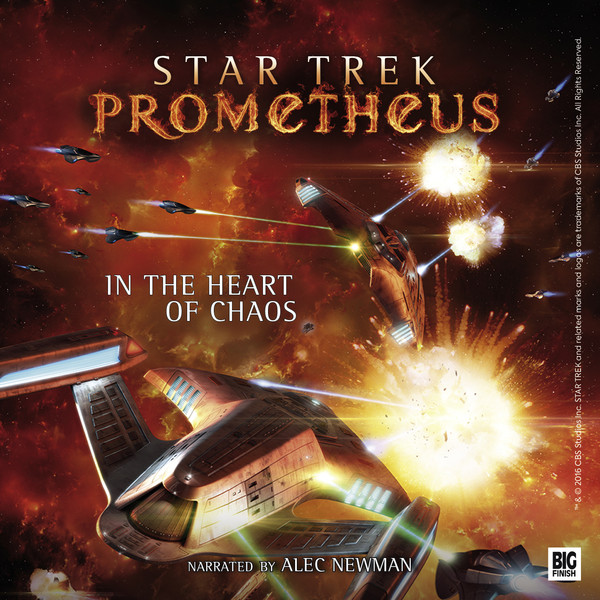 The situation in the Lembatta Cluster is deteriorating rapidly. Fleets from the Federation and Klingon Empire are heading for the borders. The crews of the USS Prometheus and IKS Bortas are racing against time to break the cycle of violence that is spreading through the Alpha Quadrant. Adams and Kromm are on the trail of a secret weapons facility, but instead discover an enemy from their pasts who seems utterly unstoppable. Together, they search for the answers to their questions, before the galaxy goes down in flames.

Originally published in Germany in 2016 to celebrate the 50th anniversary of Star Trek, the Star Trek Prometheus trilogy was written by Bernd Perplies and Christian Humberg. Now translated into English, Big Finish are delighted to beam aboard the Star Trek universe and boldly take on the unabridged audiobooks of the epic series featuring the adventures of the USS Prometheus under the command of Captain Richard Adams.

Star Trek Prometheus is narrated by Alec Newman, who featured as Malik in Star Trek: Enterprise. Big Finish listeners will recognise him from many other audio dramas, and we are looking forward to his return in Dark Shadows: Bloodline, due for release in April 2019.

In last month’s Vortex magazine, the Prometheus authors told us what they thought of the audio adaptations of their novels. Bernd Perplies: “It is great to listen to someone who is a talented storyteller and knows how to use his voice to interpret a text that was written by me. I always like it when other artists take my stories and do something new with it, may it be a theatrical stage production, a comic or an audiobook.”

Christian Humberg agrees: “I love the English audiobooks, plain and simple. Kudos to everyone involved in their production. You have made two German wordslingers very happy… and very proud.” You can read the full article in November’s Vortex magazine.

The three novels in the Star Trek Prometheus range – Fire with Fire, The Root of all Rage and In the Heart of Chaos – are available at £9.99 each or you can get all three in a bundle at £24.99.

(Please note that each release is a very large download-file – be aware of any data-charges your network may incur, and that you will need twice the filestore available on your computer or device to unzip the file).