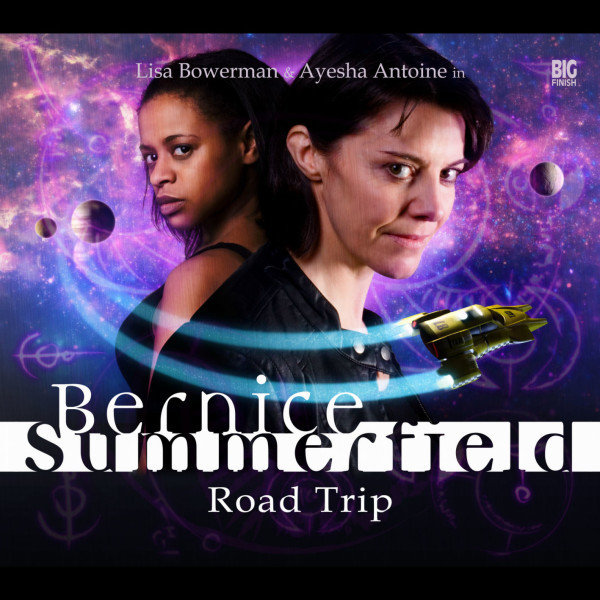 CD + Download
US $24.10
Buy
Download
US $18.07
Buy
Save money with a bundle Login to wishlist
11 Listeners
recommend this

13.1 Brand Management by Christopher Cooper
“You’re listening to Live Audio Stream G371, the only official source of government-approved easy listening entertainment, as sponsored by the Dominicci Corporation. It’s the thirteenth day of the thirteenth month, and that means just one thing, people - it’s time to PARTAYYY...!”

Bernice Summerfield needs a job. Professor Harry Burtenshaw thinks she’s just the ticket. But with the people of Lyndyaz celebrating their most important festival, and the ruling Dominicci Corporation maintaining control with draconian glee, has Bernice turned up in the wrong place at the wrong time?

13.2 Bad Habits by Simon Barnard and Paul Morris
Meet Sister Bernice - newest initiate into the order of Saint Celestion. Such is her devotion to the faith that she has undertaken a pilgrimage to the planet Agora, birthplace of the blessed Saint himself.

The pilgrims aren’t alone, however. Also on the planet is a team of archaeologists searching for the lost tomb of Celestion - a subject in which Sister Bernice seems curiously interested…

In her quest to unearth an ancient relic that will point the way to Legion, Bernice will face some fearsome challenges: the dreaded Blood Beast of Thaloon, the randiest Bishop in the galaxy, and an ancient cult with some very bad habits indeed…

13.3 Paradise Frost by David Llwewllyn
Kaff Zarnak was once the holiday destination of choice for the rich and famous. At least, it was until the planet spun off its axis, and a deadly virus wiped out its population.

Now it’s absolutely the last place anyone wants to visit: a barren, ice-encrusted wasteland, sitting amongst the stars. So when Bernice and her loud-mouthed cab driver Ray are drawn off course, it’s fair to say that they’ve both had better days.

Taking refuge inside the Xanadu Tower resort, the trio encounter Kaff Zarnak’s only survivors… and maybe the only remaining clue to what took place there. But food supplies are low, Sandroaches are attacking on every side, and the only hope of their survival seems to be locked at the top of the Tower.

Hello Lisa. Where do we find Benny at the start of Road Trip?
I really have to wrack my brains on this one; a lot of the Benny audios have been recorded out of sequence, and actually rather a long time ago now! The last we heard is that she’d been in stasis, and when she came out of it, had received a message from ‘someone’ (spoilers!) to inform her of her son Peter’s whereabouts. Road Trip pretty much says it all in the title!

How has she been changed by her experiences in Epoch?
As ever with Benny, any experience is grist to the mill. The one thing she knows now is that she can’t necessarily trust what she thinks is reality. The driving force of pretty much the first two box sets has always been her continued journey to find Peter. Having said that, the reality she thinks she knows keeps shifting – so every time she makes progress something gets in the way. Very much a case of one step forward, two steps back.

How is the relationship developing between Benny and Ruth?
I think this really works. It’s becoming more of a mother/daughter relationship, but that’s not to say that Ruth hasn’t a mind of her own – and isn’t above putting Benny in her place if she gets carried away. The fact is, they’re almost family now, and have become really reliant on each other. Certainly Benny is very protective of Ruth – and there’s a real emotional bond there.

There are some great guest stars in this box set; who were your favourites?
We’ve had an amazing range of people in. I was delighted to see Arthur Darvill again; he’s one of those actors I’ve had on my radar for some time. I met him first when he was at drama school – and I’d taken his photos. I’d subsequently seen him in a show at RADA, when I went along with Wendy Padbury, who was talent spotting at the time for her agency. Then a few years later, once he’d been snatched up by Doctor Who, bumped into him again at a convention – like you do. So to actually get him in for a part (especially now he’s so in demand) was a real coup. It goes without saying; he was really good.
Jacqueline King is also another friend (my brother’s known her for years) – and I was delighted that she said yes to taking part. Maria Von Trapp has nothing on her; you’ll see what I mean when you hear the story!
I’ve also got to put a word in for the wonderful Roger Hammond, who’s an actor I’ve been a big fan of for years – it was a real thrill to have him in!
As ever, it’s just lovely to have people in that you know, so having India Fisher around was a blast. Then new faces in Anjli Mohindra from The Sarah Jane Adventures, even ‘H’ from Steps!!! As they say, wot larks!

The box sets have freshened Benny up and brought her a new audience; how would you convince those still on the fence to take a punt on everyone’s favourite intergalactic archaeologist?
Of course I’m biased, but I truly believe that the Benny series has a bit of everything. The whole joy of the character is that she isn’t superhuman – she has weaknesses as well as strengths. To get out of awkward situations she has to use her wits, which is invariably a mixture of humour and pragmatism. Certainly in the new launch she’s very much back to her archaeological roots. I think a bit of that got lost in the last few years. I also know that [producers] Gary Russell and Scott Handcock were also very keen to get back to the old strapline of ‘Science fiction has never been so much fun’. There’s intrigue and suspense, there’s aliens, there’s space ships, there’s nuns! What more do you want? (Also the boxes look lovely – thanks to Alex Mallinson!)

You’re about to record an adaptation of the New Adventures book Love and War; how does it feel to be returning to the beginning of Benny?
This is going to be a real treat. Not only because Sylv and Sophie are so great to work with, but to actually get a chance to perform the Doctor and Ace’s very first encounter with Benny. I’m ashamed to say I’ve never read the book, but what struck me about the script is how consistent Benny is with everything I’ve known about the character since.

You’ve recently appeared on Coronation Street; how was soap life?
I’m just about to go back to do my fifth episode, which I think is my last. Actually, I’m quite sad about that (I would say that, wouldn’t I?), but despite the fact that working on soaps is horribly quick, everyone up at Granada have been really lovely to work with. There’s a communal green room with hot and cold running food, and everyone who happens to be in there at the time, no matter what their position on the programme or whether you’re working with them or not, comes and says hello and welcomes you to the show. That’s quite rare on a show which has been going that long!

What projects are you most excited about at the moment?
A project we’ve done recently – to help celebrate Benny’s twentieth birthday and also recorded for charity – has been really enjoyable. Written by some of my favourite writers, it’s a sort of portmanteau of stories.
Away from my Benny duties though, I’m genuinely excited about the new Blake’s 7 box sets, which I’ve been directing. What a great cast they were! We’ve also had some really brilliant scripts. I’m just about to go into post-production on the new Stargate box set, which again, we managed to gather a really great cast for. And, of course, the prospect of completing post-production on Jago & Litefoot. What a joy!