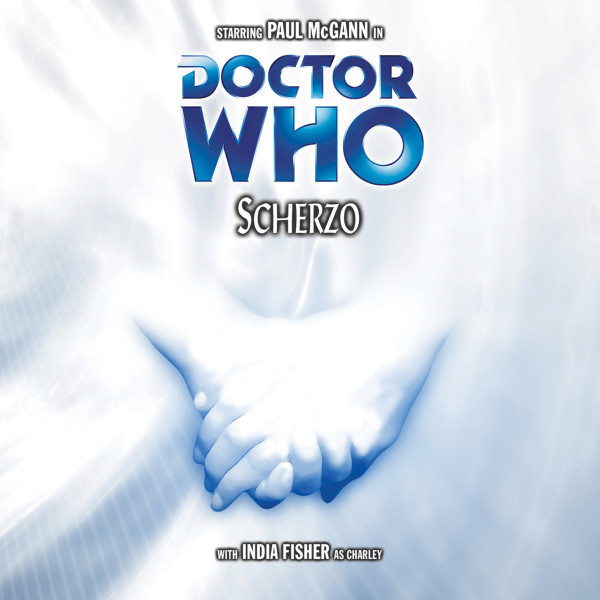 There were two friends, and together they travelled the cosmos. They thwarted tyrants and defeated monsters, they righted wrongs wherever they went. They explored the distant future and the distant past, new worlds and galaxies, places beyond imagining.

But every good story has to come to an end...

With no times or places left to explore, all the two friends have now are each other. But maybe that's one voyage too many. Maybe they'll discover things they'd rather have left undisturbed... hidden away in the suffocating, unfeeling, deafening brightness.

Once upon a time. Far, far away.

Two characters telling a story is one of the Big Finish staples these days in the form of the Companion Chronicles. But in December 2003, Big Finish released a play in effectively the same format, but as part of the monthly release schedule: Robert Shearman’s Scherzo.

Featuring the Eighth Doctor and Charley Pollard, it immediately followed the events of Zagreus, the story with Big Finish’s biggest cast to date, going from one extreme to the other. Robert Shearman, fresh from his successes with fan favourites The Chimes of Midnight and Jubilee, was invited by co-producer Gary Russell to write the story that immediately followed the fortieth anniversary special.

Gary says, “Scherzo is a love story – we needed to resolve that, have The Doctor and Charley fall out of love with each other. That was the point. It was meant to be like a theatre play – like The Chimes of Midnight, you could do it on stage if you wanted to. I wanted to do a play about music, but me being me, I didn’t want much music in it.”

Rob says, “I was quite used to writing two-handers as I had been writing quite a number of them for the Stephen Joseph Theatre in Scarborough. Every season, around the full-length plays for five or six actors in the main theatre, they’d like to put on shorter, cheaper plays to be staged in the restaurant as people ate their lunch! So it wasn’t a new format for me, writing a sustained piece of drama for only two people. I was quite happy to do the two-hander, as I thought it would be interesting to do something that was minimalist, and off I went.”

The writer also wanted to reward India Fisher [Charley] for her earlier work. “I wanted to give India a present. I thought she’d been so remarkably good in Chimes, and I just wanted to see what an actress of her ability and enthusiasm would make of something like Scherzo. Bless her heart, she certainly seized that and ran with it.”

India adored the challenge. “It was Shearman so I just adored it. I was so honoured that he’d written it for us. No one had ever written a play specifically for me! I had no issue with the ‘love’ aspect of the Eighth Doctor and Charley’s relationship, so I thought Scherzo was a wonderful exploration of it. And I’m a sucker for the bizarre, so kissing and melding into one entity was right up my street.

“We recorded it as live, in one take. We had a †¨read-through and then we just did it. Weirdly, being a two-hander makes that easier. By then, Paul [McGann] and I were very in tune with how the other one worked, we set up our mics facing one another and just went for it. I loved working like that and it made sense of all the emotion and crescendos.”

Rob adds, “The inspiration was that Gary told me that when the Doctor went into this new universe, he was sacrificing himself. I remember wanting to do something with that – he had given up his life for Charley, and everything and everyone he knew, but then she goes and follows him in. I remember thinking, ‘Wouldn’t that really annoy him, as he’s sacrificed himself for nothing, because she’s gone in too, making that sacrifice invalid.’

That’s what I wanted to do, but as a result I had the Doctor being very un-Doctorish, being very angry throughout it, as he couldn’t deal with Charley’s declaration of love for him, which was something the TV series hadn’t dealt with at the time, the whole idea of a companion having feelings for the Doctor.”

Handling the sound design was Andy Hardwick at ERS Studios, but with no music present, did that make it harder? “Harder in a way, but as soon as I heard the words being spoken, it was obvious that any music and much in the way of background noise would completely ruin the vibe. It was like these two are so completely alone that any background music would be like providing company for them or something.

“I loved the way that when something in terms of sound did start occurring, it was almost whimsical and a character you’d care about – so I absolutely love the bit where it suddenly screams, ‘Help me!’ I tried to make that sound as loud, violent and unexpected as I possibly could. I tried it out on a friend and he spilt his coffee all over his trousers, so I knew we’d got it right!”