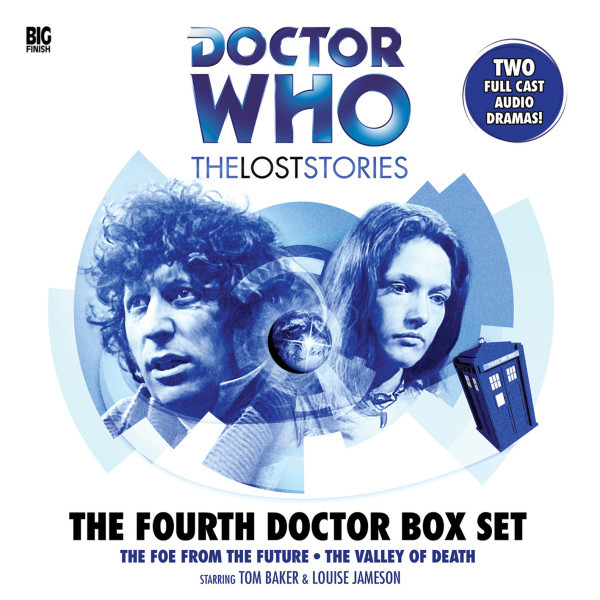 3SP. Doctor Who - The Lost Stories: The Fourth Doctor

Download
US $30.79
Buy
Save money with a bundle Login to wishlist
55 Listeners
recommend this

The Foe from the Future by Robert Banks Stewart, adapted by John Dorney
The Grange is haunted, so they say. This stately home in the depths of Devon has been the site of many an apparition. And now people are turning up dead. The ghosts are wild in the forest. But the Doctor doesn’t believe in ghosts.

The TARDIS follows a twist in the vortex to the village of Staffham in 1977 and discovers something is very wrong with time. But spectral highwaymen and cavaliers are the least of the Doctor’s worries.

For the Grange is owned by the sinister Jalnik, and Jalnik has a scheme two thousand years in the making. Only the Doctor and Leela stand between him and the destruction of history itself. It’s the biggest adventure of their lives - but do they have the time?

The Valley of Death by Philip Hinchcliffe, adapted by Jonathan Morris
A century after his Great-Grandfather Cornelius vanished in the Amazon rainforest, Edward Perkins is journeying to the depths of the jungle to find out what became of his ancestor’s lost expedition. Intrigued by what appears to be a description of a crashed spacecraft in the diaries of that first voyage, the Doctor and Leela join him on his quest. But when their plane runs into trouble and ends up crash landing, everyone gets more than they bargained for.

The jungle is filled with giant creatures and angry tribesmen, all ready to attack. But in the famed lost city of the Maygor tribe, something far, far worse is lurking. Something with an offer to make to mankind. Who are the Lurons and can they be trusted? Will the Doctor defeat the plans of the malevolent Godrin or will he become just another victim of the legendary Valley of Death?

Robert Banks-Stewart, who originally scripted The Foe From the Future, passed away on Thursday, January 14th 2016. John Dorney, who adaptated Robert's script for this release, wrote in tribute:

'Four years ago I was interviewed for Doctor Who magazine about my upcoming script “The Foe from the Future”. Here's how that interview ended:

“It feels like a collaboration to me, although it's slightly odd collaborating with someone you've never had any contact with. This story feels as though it's 50% Robert Banks Stewart and 50% me. If the story is a success, I owe all that to him, because the material is so good. Robert is the person I most want to impress with this, and I can't wait to see what he thinks."

'I've always loved Robert Banks Stewart's Doctor Who stories. They manage to be both unlike any other story and uniquely Doctor Who in feel. They're skillfully written, with characterisation and dialogue to die for. Seeds of Doom, I particularly adore - I think Harrison Chase is very probably my favourite villain ever in Doctor Who.

'So it was a complete honour to be asked to take his unused storyline for Foe and develop it into a full script for Tom Baker and Louise Jameson. I really wanted to capture the flavour of his two classics, so watched them repeatedly. I used them as a guide - making the villains ruthless, the victims tragic and heartbreaking, the good guys fun and amusing. And the deaths. Oh, the deaths. Brutal and beautifully apt. Everyone seemed very happy with the script, and the recordings went incredibly well. I was as happy as I thought I could be.

'So it was somewhat surprised when I received, out of the blue, an email from Robert himself telling me how much he'd enjoyed it, and thanking me for the nice things I'd said about him in the interview. That email meant the world to me and it was a lovely, generous one to send. I'll always treasure it.

'I sent him an email back thanking him for providing me with excellent source material, and telling him that I'd said nice things because it's easy to speak the truth. Oh, and mentioned my love for Harrison Chase. Because why not?

'It goes without saying that Doctor Who was only a fraction of Robert Banks Stewart's rather glorious television career. His name appearing anywhere was always an indicator of quality. He was a writer of immense talent, and we should be grateful he dipped his toes in our pond. He will be much missed.'