The cover artwork is revealed for the first part of a new set of adventures for the Blake's 7 crew. Launching in October, Crossfire Part 1 takes the Liberator crew further than ever before.

We absolutely love the artwork for Crossfire! Take a look: 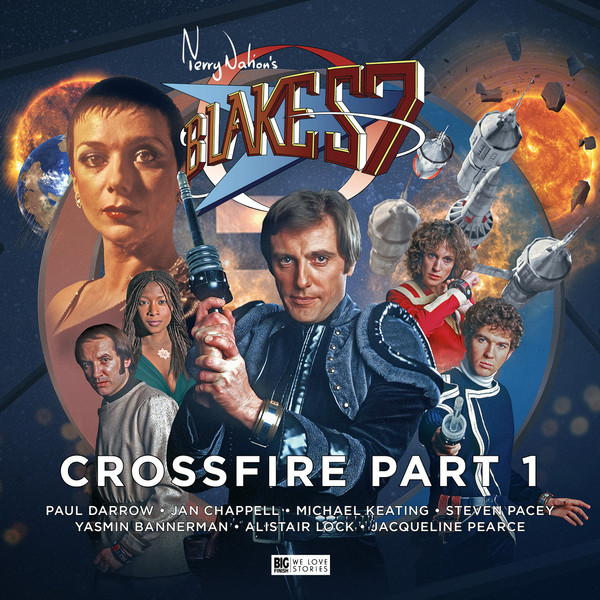 Crossfire Part 1 is the first of three box sets of epic new stories – 12 adventures in total – for the Liberator crew, set during the third series of the original television show. That’s four new adventures per box set with Paul Darrow, Michael Keating, Jan Chappell and Steven Pacey joined by Yasmin Bannerman as Dayna and Alistair Lock as super-computer Orac.

Erewhon was a legendary vacation planet – until it was ravaged by acid storms. A new friend brings the Liberator crew here, their objective: to assassinate an old enemy. But what they find beneath Erewhon’s surface will plunge the galaxy into turmoil.

A criminal scheme threatens the balance of power in the Federation, and Vila’s skills offer the best hope of containing the chaos. Bolstered by Cally’s telepathy, he leaps into action – but when Servalan arrives on the scene, the situation quickly spirals out of control...

We talked to producer John Ainsworth about this thrilling take-off to another series: “With Crossfire, we’re setting out to recreate something of the feel of the seasons of the TV series. Together, all three box sets of Crossfire will form a season of 12 episodes. Each episode will tell a self-contained story but there will also be a linking arc story which will come to a climax at the end of the season.

†¨†¨“Unlike our previous full-cast releases, partly dictated by the sad loss of Gareth Thomas, all our new Blake’s 7 stories will now be set during the same timeframe – at the very end of the third TV series – and will tell their stories in chronological order. Hopefully, this will be an even more rewarding listening experience as characters and themes develop over time.”

Pre-order these Blake’s 7 adventures now from Big Finish for £25 on download or £28 on CD – don’t forget each CD purchase unlocks a download exclusive on the Big Finish app. Or you can save money in a bundle! Order all three parts of Crossfire and Series 3 - The Spoils of War for £80 on download or £100 on CD.

Part Two is due for release in January 2018 and the final chapter will be with us in April 2018. Further story details and the trailer for Crossfire will be made available on the Big Finish website and on our social media channels – Facebook, Twitter and Instagram – soon.