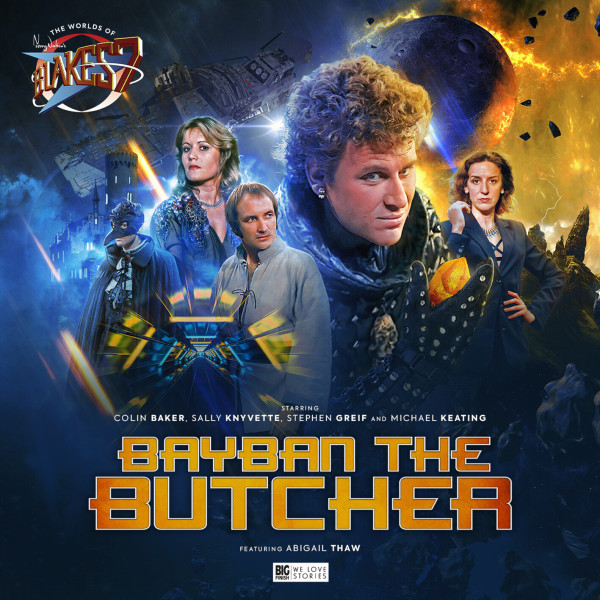 CD + Download
US $29.91
Buy
Download
US $23.92
Buy
Save money with a bundle Login to wishlist
13 Listeners
recommend this

Even a psychopath must start somewhere. Bayban's criminal career began well before he first met the Liberator crew. Somehow, his career also survived that fatal encounter with them.

Bayban isn’t the forgiving type. Jenna, Vila and even Travis are about to learn that they don't call him the Butcher for nothing.

But a new, rival captain is interfering in the supply chain. And Bayban doesn’t care who gets hurt in the process.

2. The Butcher's Wife by Lizzie Hopley
Desperate after escaping certain death, Bayban plans to pair up with a princess and usurp the wealthy planet Arl – unless another secretive visitor prevents him.

Bayban and Travis are both survivors. The question is whether Arl can survive the pair of them.

3. Vengeance Games by Lizbeth Myles
Bayban is in the mood for settling debts. He’s hunting down his old enemies – literally. All the better if he can make a profit from the game.

Vila Restal isn’t usually the sort to avoid gambling – unless he has to stake his life.

Recorded on: 23-25 March 2021
Recorded at: Audio Sorcery and remote recording

Co-producer Peter Anghelides: “I've always wanted to hear Bayban return in the Big Finish range. I once had the temerity to suggest on Twitter than Bayban's demise in City at the Edge of the World was no reason to avoid bringing him into the series – and perhaps he could play Bayban's dad?

Colin Baker's splendid response was: "Bayban's Dad? BAYBAN'S DAD??? Why not younger brother – or even Bayban himself? I never believed he died you know..."

“Well, almost a decade later, we are able to make it happen. Our inventive trio of adventures are set at different times in Bayban's life: we see what he was like before his TV debut, shortly after it, and then once he has re-established himself as a threatening presence in the world of Blake's 7.”

It's great to have Colin Baker back with us, relishing playing Bayban. He brings such energy to what he does... Well done, all.

With Big Finish being able to shine a light on pieces of the series’ mythology, and explore characters who deserve more attention, The Worlds Of Blake’s 7 really is proving to be a success, and hopefully we may yet get to hear far more from Baker as the Butcher. 4/5

Bayban the Butcher is another entertaining spin-off, although quite different in tone from The Clone Masters which preceded it. These stories are shot thought with Colin Baker’s infectious enthusiasm for the role and, as a result, lots of fun. I imagine there’s plenty of room for a few more stories yet before the Butcher hangs up his boots!

Michael Keating is as solidly reliable as ever as Vila, and it really is hard listening to him and Baker verbally sparring to think that four decades have gone past since they were together on TV... May the odds be ever in Vila’s favour! 8/10