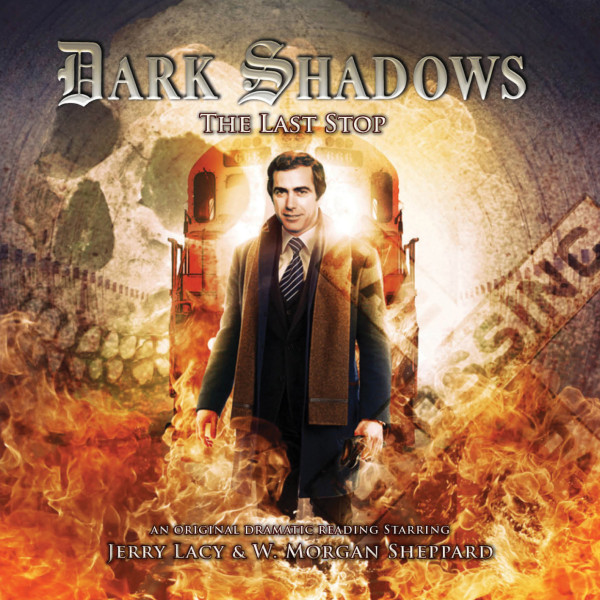 CD + Download
US $6.04
Buy
Download
US $4.99
Buy
Save money with a bundle Login to wishlist
6 Listeners
recommend this

"Every man's a gambling man, don't you think?"

Tony Peterson is a lucky man. He's just caught the last train back to Collinsport. It's been a good day - he's renewed an old friendship and been offered a job he cannot refuse. His life is about to change.

But Tony Peterson's luck has just run out. The last train home will turn out to be a very long journey. Will Tony be able to trust the only other survivor? And what decision will Tony make when he's presented with another offer he cannot refuse?

This story takes place after The Voodoo Amulet.

Hello David! You've written this month's Dark Shadows offering, The Last Stop. What's going down it Collinsport??
Well, actually, we’re just outside Collinsport, on a midnight train from Boston. Lawyer Tony Peterson is on his way home from a night with an old college friend, but the journey isn’t a smooth one!

Have you been mired in the world of Dark Shadows long?
I’m very much a new recruit. It’s only a couple of years since I was introduced to the show, and even then it was the 2004 pilot. It was a while before I’d see any of the original series.

What appeals to you most about the characters of Tony and Cassandra?
It was actually Tony I was drawn to initially. My story started as an idea I had while travelling on the Tube a few years ago, and I knew that as a protagonist I needed an everyman character, someone contemporary – or at least contemporary to when the original series aired – and more down-to-earth than some Dark Shadows characters! Of course, Cassandra/Angelique is the total opposite of that; she’s larger-than-life, supernatural, and about 300 years old, but that’s what makes them good foils for one another.

How much research is required to get into the minds of the characters?
It’s good to read over character histories, any appropriate scripts, etc, to make sure the characters are themselves in the finished piece, but there always has to be a departure point when you’re the ventriloquist and the character is the dummy; when you’re imagining what they think, how they’ll react, and not just basing it on what’s gone before. So some research is essential, but too much can be a lead weight.

What can new listeners and old find to love in The Last Stop?
I hope long-time fans will see a new side to Tony Peterson, but being a Dark Shadows novice myself, I think it’s written in such a way that newcomers can just enjoy it as a claustrophobic and sinister little drama.

Have you seen the Dark Shadows movie?
Confession time… I still haven’t, but it’s on my list. From the trailer, it’s clearly a very different animal to the original series and the audio dramas, but the clip where Barnabas attacks the TV (“Reveal yourself, tiny songstress!”) made me laugh like a drain. I just hope it’s not the only good joke in the movie.