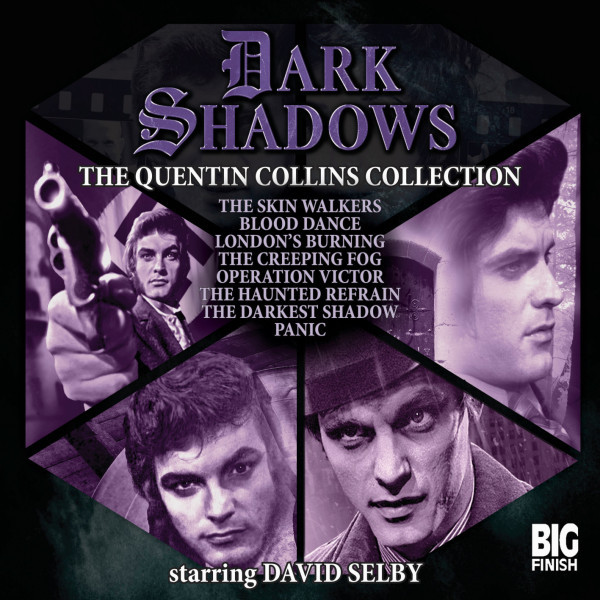 Download
US $42.18
Buy
Login to wishlist
4 Listeners
recommend this

1. The Skin Walkers by Scott Handcock

“There is no such thing as choice, not here… Merely the inevitable...”

New York, 1899. A city full of hopes, dreams and love… Quentin Collins has left Collinsport, hoping to leave his family and their terrible secrets behind, for ever. But something new and evil is stalking him. As the Skin Walkers seek to take command of a new century, they need Quentin at their side. Just as the prophecy foretold…

“I knew instantly that a dangerous power was at work here…”

The year is 1929, and Quentin Collins finds himself in Chicago, captivated by the city’s energy and the prospect of a new love. Drawn into the twilight world of speakeasies and organized crime at the Arcadia Club, he becomes embroiled with owner Chandres Tessier – an enigmatic woman to whom he is inexorably drawn, but who hides a dark secret...

1941: As bombs fall on the city of London, Quentin Collins is reunited with his old friend, Rose. Trapped in an Underground station, she claims to have no memory of him. So he tells her how they met… 1906: Music hall star Rosie Fay is the talk of the town. But what connects her to the cases of spontaneous human combustion plaguing London’s ladies of the night? And why is Quentin so interested in the song she sings?

4. The Creeping Fog by Simon Guerrier

London, 1941. Quentin Collins need not fear the bombing because he is immortal, but there's much else to be scared of. The voices of his past will not rest. They are the ghosts of those he's lost. And there are other voices... A creeping fog reaching out to him...

Taking refuge in an old museum will not help Quentin either, for the museum has ghosts of its own.

More voices reaching out through the darkness...

“As the saying goes, all’s fair in love and war.”

Immortal wanderer Quentin Collins has done his best to stay on the sidelines of the Second World War, but now he's been recruited by the British Secret Service. His mission: to infiltrate the castle of Professor Moloch in the heart of the Black Forest.

For the Third Reich is hiding a dark secret – Moloch has been dabbling in the occult, and he's reached out to some very dark forces indeed.

Will Quentin be able to stop him? And does dashing agent Sally Green have a score of her own to settle?

6. The Haunted Refrain by Aaron Lamont

Barbara loves her husband and their new home. But something is missing from her life. Something she can't explain... Until, one day, she finds it.

An old gramophone sits in the attic. And, on it, she hears the voice of man called Quentin Collins. A voice that talks back to her, begging her for help.

Something has trapped the soul of Quentin Collins. But he isn't alone...

7. The Darkest Shadow by Nev Fountain

“I am Olivia Corey, the eternal actress.  I’ve lived my whole life in two dimensions.  Perhaps I prefer it that way.”

Olivia Corey has been offered the role of her life.

They’re making a movie called The Curse of Collinwood by Mr D Curtis. Apparently it’s based on a true story about an old house in Maine where all manner of terrible things happen.

Olivia is offered the role of ‘Amanda Harris’, a woman created from a painting, destined to fall in love with a cursed man, destined to roam the Earth to find him again.

How could she refuse? After all, it’s the part she was born to play…

"The further into the antique shop she explored, the darker it seemed to get, until Lela couldn’t see the walls at all..."

Lela Quick is a busy woman. She’s got essays to mark, journals to edit, books to write...

But every night she is tormented by the same dream: a nightmare of pursuit through a dark forest, the air filled with haunting music.

A chance meeting with Quentin Collins, the enigmatic owner of Pandemonium Antiques, adds to her growing sense of unease. Soon both their lives are in danger - if they can’t escape the panic...