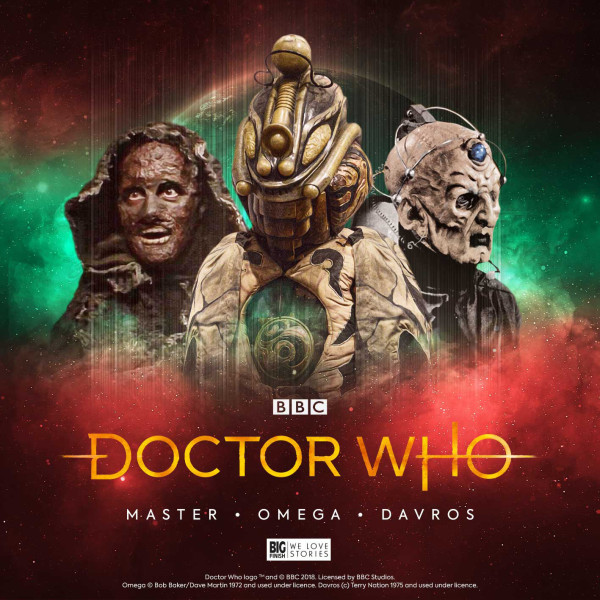 This download version is available exclusively to readers of Doctor Who Magazine #547 using a valid access code.

A strange telepathic message prompts the Doctor to travel to the 'Sector of Forgotten Souls', a place where, thousands of years ago, Omega's ship vanished whilst detonating a star.

He's not the only one journeying towards it. 'Jolly Chronolidays' prides itself on giving its tourists an experience of galactic history that is far better than mere time travel.

Its motto is 'We don't go into history, we prefer to bring history to you'.

When Omega's ship suddenly materialises in front of their shuttle, and one of their employees goes insane and tries to destroy his hands... suddenly it's not just a motto anymore.

And Omega - and his madness - is closer than they think.

TAI stock has shot up by over fifteen percent on news that galaxy-famous scientist Davros, controversial creator of the Daleks, has been hired to work on unspecified technological projects.

Davros has been given the chance to redeem himself.

Humanity stands on the verge of a new era, but it needs the help of the galaxy's greatest ever scientist. But Davros is dead... isn't he?

From the bunkers and shelters of ancient Skaro to the gleaming Domes of the Future Earth Empire, Davros has always been a man of destiny. Now he's working for mankind's benefit. But how much do we really know about Davros?

Has Davros really turned over a new leaf? The Doctor certainly doesn't think so. But is the Doctor always right?

Many years ago, on a dark and stormy night, the disfigured and enigmatic Doctor John Smith invited his closest friends, Inspector Victor Schaeffer and his wife, Jacqueline, to a dinner to celebrate his birthday. A few hours later all the occupants in that house had been changed, ­some were dead, others mentally scarred forever by the events of that night.

So, what happened to the distinguished dinner guests on that evening? Perhaps, we¹ll never know. But two clues have led to much speculation ­ found outside the study window, a charred umbrella with a curved red handle and found inside the house, a blood-stained copy of Stevenson¹s The Strange Case of Dr Jekyll and Mr Hyde.

But, for everyone else, is there no end to this one night of Hell?

Bringing back old enemies is always a popular move with Big Finish fans. Big Finish released Omega as monthly play number 47 in August 2003, as part of the fortieth-anniversary celebrations, reuniting Peter Davison with his Arc of Infinity co-star Ian Collier, who sadly died in 2008.

It was Nev Fountain’s first play for Big Finish, and he said: “The Three Doctors has such imagination, humour and flair to it – it is such an underrated script, and Bob Baker and Dave Martin are underrated writers – and Omega is such a good creation. In Arc of Infinity Johnny Byrne injects pathos and sympathy in Omega and makes him a far more interesting character.
“I love Arc for the same reason I was excited about writing for the Fifth Doctor versus Omega. They are so well matched, because Omega isn’t a particularly good villain, and the Fifth Doctor isn’t a particularly good hero. They never quite match up their words to their deeds, which appeals to me.

“It struck me from watching The Three Doctors and Arc of Infinity how Omega scales down his ambitions and his plans each time we meet him – from destroying the universe to just existing in the universe. I scale them down still further - he’s preoccupied by how the universe will remember him. A lot of it’s about history, and like Jubilee, it’s the perception of history, and how easy it is for history to distort how you remember characters and people.”

Joining the cast for his Big Finish debut was actor Conrad Westmaas, who made such a good impression on producer Gary Russell that it led to his casting as the Eighth Doctor’s companion C’rizz.

He said: “There’s a real sense of fun underneath it all and Nev’s knockabout Hitch Hiker’s-style treatment somehow feels right for a villain who seems to struggle to find his place in Time Lord history.

“Taken in the right spirit, there are some chuckles to †¨be had in hearing his story told via amateur reenactments, half-baked myths and talking action figurines and there’s some poignant and grisly stuff in there too and plenty of nuggets of Gallifreyan history in the mix with references and flashbacks to Rassilon, the Hand of Omega and TARDIS graveyards.

“I’ll always have a soft spot for this story as it was my first introduction to the bonkers world of Big Finish and brings back happy memories – the brilliant Hugo Myatt, the very glamorous Caroline Munroe, and being able to feel the late Ian Collier’s deep, booming voice rumbling in the floor whenever he spoke. Carry On actress Faith Kent completely steals the show with the beautiful delivery of her few lines – pure class.”

Nev added: “Ian Collier’s performance was utterly amazing. What a voice! I still get goosebumps just listening to the trailer, when this unmistakable rumble comes through the speakers talking about Peylix. There are two reasons why this story belongs to the world of audio, and the other reason was his fantastic voice. I am so glad he managed to return to the part one more time.”