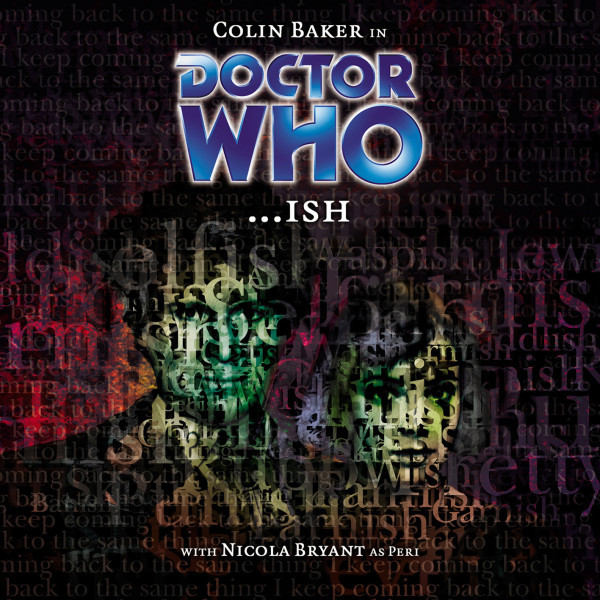 A conference of lexicographers: bromides in tweed. But the leading expert in the field is found dead by her own hand - and by her hologlyphic assistant. Is he responsible? Does the death fit any conventional definitions? Can the Doctor deduce who wrote the suicide note and why, exactly, it was riddled with spelling errors?

Peri should help out, but there's a guy. Someone who loves language even more than the Doctor. Maybe, she realises, enough to kill for. Or perhaps just enough to ask her out to dinner. Unless, of course, he's already spoken for...

Is it madness? Seeking transcendence in the complete lexicon? Having the right words on the tip of your tongue but never quite knowing when to use them?

This story takes place between the television adventures, Revelation of the Daleks and The Trial of a Time Lord, and after the Big Finish audio drama

Kenny Smith unravels the mysteries of one of Big Finish’s weirder stories: …ish
It’s the release that puts the ‘ish’ in Big Fin. When the Doctor takes Peri to witness the launch of the Lexicon, the most exhaustive dictionary of the English language ever seen, little does he realise he’s literally about to engage in a real war of words in …ish.

Writer Phil Pascoe was inspired to send in his submission to Big Finish during one of their open door windows in the early days, allowing writers to send in their unsolicited story ideas. He had heard Big Finish executive producer Jason Haigh-Ellery talking at a Doctor Who convention in Sydney in February 2000, and decided to try his luck.

He says, “After Jason Haigh-Ellery’s talk at Whovention, I wandered into the video room where they happened to be showing The Trial of a Time Lord part five, the scene where the guard asks, ‘Is he a young man, this Crozier?’ and the Doctor replies, ‘Well, young… ish.’ He then suggests he and Peri try the ‘skedaddle technique’.

“Now, I found this interesting. The Doctor spends much of season 22 telling Peri off for her Americanisms, but here he’s using verbal shorthand as a kind of code that only they share. The way they communicate has changed, so exploring why that might be became the story.”

His submission was read by producer Gary Russell, who was impressed with the notion and commissioned Phil to write the full play. But, Phil says, “I worried at times about how well an Australian could play up the differences in the Doctor and Peri’s ways of speaking. But I think that an outsider’s perspective gave me an advantage that a North American or British author tackling the same idea wouldn’t have.

“The Sixth Doctor was fun to write for, especially writing him as the Sixth Doctor, bombast and pedantry and all. I always had a feeling the audios would give Colin Baker’s interpretation of the character a renaissance.”

Colin Baker himself admits, “I relished it because I have an abiding love of language and the subject matter appealed to me enormously.”

Directing the story was Nick Briggs. He says: “…ish was an interesting challenge. We had a lot of fun in the studio, because Colin Baker, noting the linguistic nature of the script, brought in his volumes of the concise Oxford English Dictionary. The print was so small, each volume came with its own individual magnifying glass to read it. We made use of those magnifying glasses. So Colin and I spent a lot of time in the control room looking up words. We found a few better replacements, but also reaffirmed some of Phil’s excellent use of language.

“It is true that I felt it my duty to bolster up the drama a bit with some last-minute rewrites. I felt that the very clever, engaging concept behind the story also needed some dramatic build-up, especially around the episode climaxes. But it all came together rather well. There were some problems in post-production, with a new sound designer who was extremely talented but not quite prepared for the huge weight of the actual workload. It taught me a lesson about auditioning and preparing new sound designers properly! Life is one big learning curve, that’s for sure…”