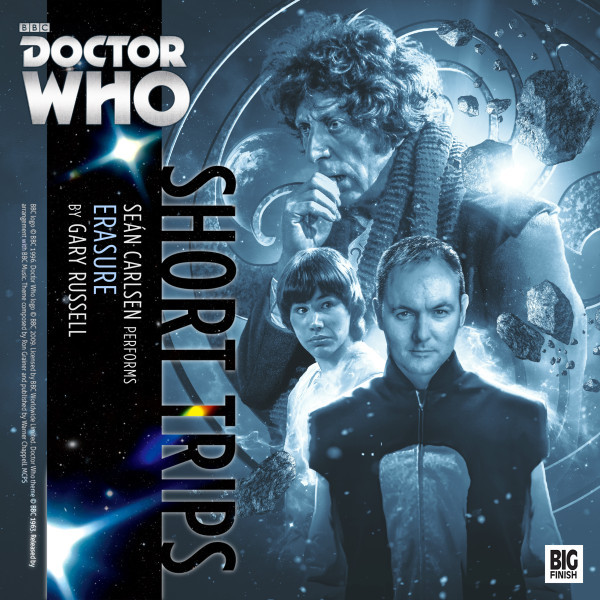 Download
US $2.99
Buy
Bundles Login to wishlist
20 Listeners
recommend this

10/10 “Don’t worry if you’ve not followed the Gallifrey spin-off audio series – everything you need to know about the characters is provided – and enjoy a different perspective on the Doctor… and a reminder why the Doctor is often so mistrustful of his own people.” SciFi Bulletin

"Erasure is one of those frozen-over ponds that twinkle and sparkle with fun and wit and wiping Adric out of space and time, and it’s all good fun till someone loses their innocence. It will whip you along, getting you involved both in Narvin’s point of view and his adventure with the Fourth Doctor and Adric, and then, very close to the end, it will drop you through a hole in the universe and land you in cold, cold water" MassMovement

“His narration is perfect and captures the Doctor and Adric superbly. Narvin is used well and gives us a peek into the character’s early years, which was an unexpected insight to get on a character we’ve been following across Big Finish for well over a decade. It is certainly interesting to see that he has a real dark side… ‘Erasure’ is a brilliant forty minute trip to take” Blogtor Who

"Seán Carlsen does a really good job of carrying this story single-handedly... Gallifrey fans are sure to enjoy this one. For those who’ve yet to listen to the series, this is a great introduction to one of the most important characters of the series." Doctor Who Watch

The Celestial Intervention Agency, a shadowy, unspoken of part of the Time Lord hierarchy. Beloved and loathed in equal measure by various Presidents and High Councils the millennias over. But they serve a very important function: they keep the time lines safe and clear - they do the darker, dirtier jobs that most Time Lords would prefer not to know even need doing.

CIA Sub-Coordinator Narvin has always taken his oath to uphold the Worshipful Laws of Gallifrey very seriously. But when he is sent on a mission to investigate the planet Bellascon, even he hasn't reckoned with the force of nature that is the Fourth Doctor, who has - one might say - his own way of dealing with things, and his own views on people like Narvin. But somehow the two must overcome their instincts and work together to stop the web of time being erased forever...