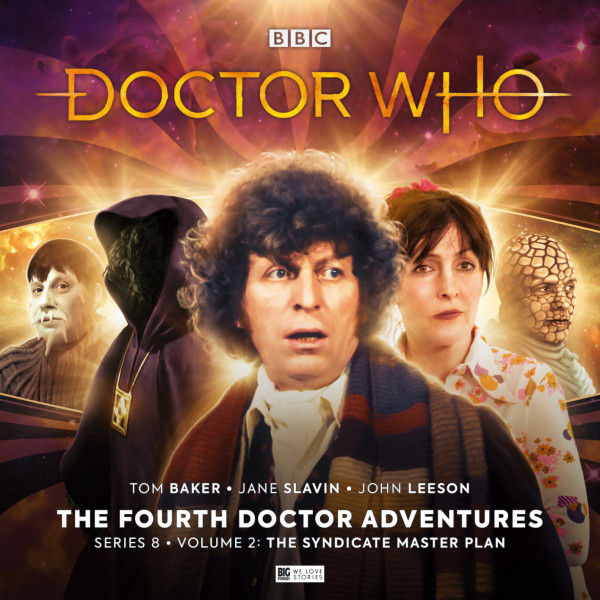 8B. Doctor Who: The Fourth Doctor Adventures Series 08 The Syndicate Master Plan Volume 02

The true identity of the Director has been revealed and he wants vengeance upon the Doctor for past crimes...
But the Director is not the only danger to the crew of the TARDIS. Deadly experiments are coming to a head, and everyone’s life is at risk.
However, the greatest threat is yet to come. The Syndicate’s plans are in motion... and no one is safe from them.
8.6 Fever Island by Jonathan Barnes
Jason Vane is England’s suavest secret agent, and today he’s on his deadliest mission yet. Tracking down the evil Okulov... before he destroys the world.
The Doctor, Ann and K9 are, in contrast, finding their own mission a little hard to complete. A strange storm in the vortex has swept them back in time, back to Earth in 1978 and a strange place called ‘Fever Island’.
A place where their worst nightmares are about to come true...
8.7 The Perfect Prisoners Part 1 by John Dorney
The Doctor, Ann and K9 are hot on the trail of the Syndicate, and straight into trouble.
After contending with killer robots and dangerous aliens, the clues lead straight to a machine that can literally make your dreams come true. A device that in the wrong hands could lead to misery for billions.
But who’s the real villain here? And what exactly is their master plan?
8.8 The Perfect Prisoners Part 2 by John Dorney
Secrets have been revealed, and the Doctor and his friends at last know who they’re fighting.
An epic journey across space leads them to the true mastermind of the Syndicate conspiracy.
Alliances will shift. Friends will die. Can even the Doctor come out of this alive?
This run of adventures started with Doctor Who - The Fourth Doctor Adventures: Series 8A
Recorded on: 17 June, 4, 6 and 17 October 2016
Recorded at: Audio Sorcery Studios
Previous release in this range: Doctor Who: The Fourth Doctor Adventures Series 08 The Syndicate Master Plan Volume 01
Next release in this range: Doctor Who: Purgatory 12