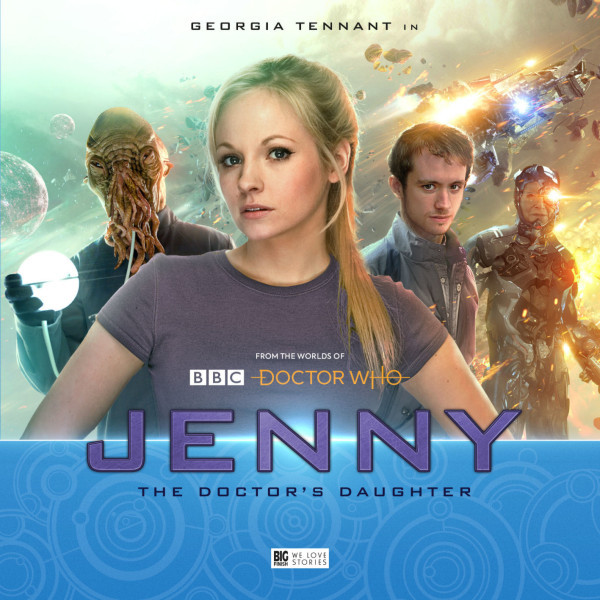 CD + Download
US $43.02
Buy
Download
US $36.87
Buy
Save money with a bundle Login to wishlist
72 Listeners
recommend this

Jenny is brand new to the universe. Born a soldier, made for war, she has a Time Lord's heritage. Luckily, that Time Lord is the Doctor.

She's ready to save planets, fight monsters, and save the day, using nothing but her bravery, wit and instinct - and an awful lot of running.

1.1 Stolen Goods by Matt Fitton
Jenny is new to the universe and keen to explore - but in unfamiliar spaceships, accidents happen. She’s lucky to have someone on-hand to help. A slippery, fast-talking someone, called Garundel.

Soon, Jenny is mixed up in cons and explosions. But she also finds something strange, inexplicable, and as new to universe as she is. She'll call him Noah.

1.2 Prisoner of the Ood by John Dorney
Moving into Leafield Crescent, Angie Glazebrook is surprised by an unexpected caller. But not half as surprised as Jenny, suddenly transported to a suburban close on twenty-first century Earth.

And that's nothing to the surprise of the neighbours when alien visitors start appearing. Visitors with tentacled mouths, carrying death-dealing orbs. The Ood have come for their prisoner...

1.3 Neon Reign by Christian Brassington
The Dragon Lord rules Kamshassa with fear. Half the oppressed population live in an addicted stupor, while the other half are forced into service. Factories belch poisonous smoke, and Dragon Guards patrol the streets, condemning dissenters to the Eternal Fire.

When Jenny and Noah arrive, it's only a matter of time before they start a revolution.

1.4 Zero Space by Adrian Poynton
Out in deep space, in the middle of - quite literally - nowhere, Jenny and Noah believe they've found a safe haven. And, very possibly, some answers. But the space station holds many secrets, and it won't be long before Jenny's past catches her up.

Bounty hunter COLT-5000 is on her trail and will stop at nothing to hunt down its quarry... even in Zero Space!

The Doctor’s daughter is fantastic, a breath of fresh air. The theme music is epic... It perfectly encapsulates the Doctor’s nature in Jenny. The stories and the cast are engaging. The sound design is flawless... Jenny: The Doctor's Daughter is firing on all cylinders. A perfect synergy between cast and crew. I’m practically begging for series 2.

Georgia Tennant is simply magnificent, backed up by an absolutely stellar cast that manage to shine in even the smallest of roles. A marvellous debut for a series that has plenty of life left in for future instalments!