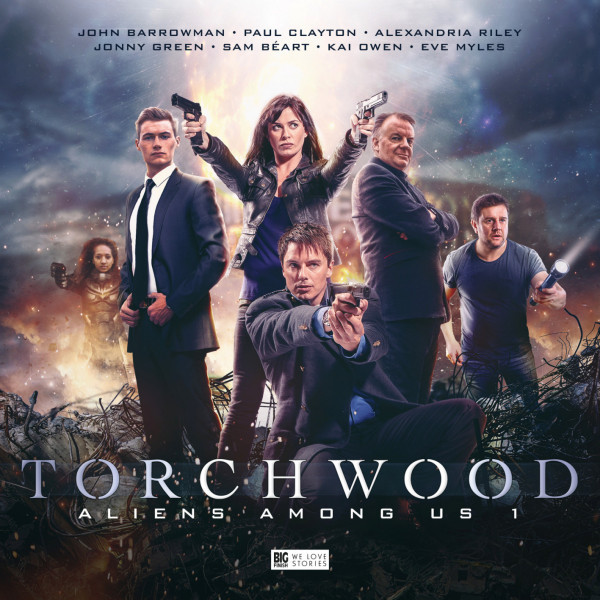 CD + Download
US $40.13
Buy
Download
US $29.99
Buy
Save money with a bundle Login to wishlist
43 Listeners
recommend this

Big Finish picks up the events after Miracle Day with Torchwood: Aliens Among Us.

Captain Jack and Gwen Cooper have restarted Torchwood. But it's in a very different Cardiff. Something terrible's happened to the city. With every day getting darker, will Torchwood need to adopt a whole new approach?

5.1 Changes Everything by James Goss

Tyler Steele has washed up in Cardiff looking for a fresh start. A disgraced journalist, he’s looking into the Red Doors movement – are they really behind the terrorist attacks on immigrants? Who is stirring up the racism and hatred in the city, and what does outsourcing contractor 3Sol have to do with it? Tyler finds out that Torchwood - a secret organisation that everyone thought long gone - is back in business. Tyler realises that this is the second chance he's been looking for, and he'll do anything to be a part of it.

Has Cardiff really been invaded by aliens? Tyler thinks he’s found a lead – the daughter of the mysterious Ro-Jedda is getting married and has booked a private party. If Torchwood can infiltrate it, there’s a chance they’ll end up closer to the truth. Free bar, canapes, and the chance to find out what’s really going on. What could possibly go wrong? Soon Torchwood are on the run for their lives and learning more than they ever wanted to about alien life.

Vincent Parry is the most successful property developer in Cardiff. A while ago he made an agreement with the mysterious Ro-Jedda, and it is an arrangement he has come to bitterly regret. Something has to be done – but it’s going to cost him everything he loves. With time running out for Cardiff, Torchwood encounter an alien who knows them only too well.

Poverty and homelessness are on the rise in Cardiff. The streets are full of the desperate and the dispossessed. So, of course, it’s the right time to open a 7-star luxury, all-inclusive hotel. And, naturally, the hotel is for aliens only. As the humans stand outside the gates and look hungrily in, there’s one thing that makes them smile. Someone is murdering the guests.

The writing, acting, and direction from Scott Handcock are all perfect. You can clearly see the hand of the new Torchwood audios and of Russell T Davies who they consulted for this new set. It’s the perfect mix of all versions of Torchwood we know and love. 10/10

It is good to welcome Torchwood full-cast dramas back and returning to its original focus of the rift in Cardiff. I just wish we didn’t have to wait so long for the next one!

One thing I have to commend James Goss for in his writing is creating dialogue that feels so naturalistic even though it’s set in this sensationalist setting.

A great new start to Torchwood. It's everything you could've hoped for from a TV episode and more.

A great first outing for this new Torchwood dynamic, capped off with a wonderfully-executed twist at the end.

Shop all audiobooks
Next release in this range: Torchwood: Aliens Among Us: Changes Everything