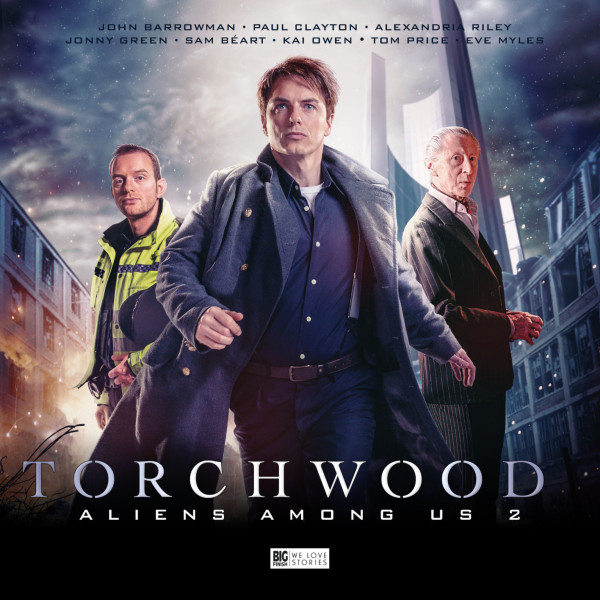 Download
US $36.26
Buy
Save money with a bundle Login to wishlist
29 Listeners
recommend this

Big Finish picks up the events after Miracle Day with Torchwood: Aliens Among Us...

Captain Jack and Gwen Cooper have restarted Torchwood. But it's in a very different Cardiff. Something terrible's happened to the city. With every day getting darker, will Torchwood need to adopt a whole new approach?

Captain Jack Harkness is dead, and that’s the simplest thing that’s happened to him in the last few days. Even the manner of his death is surprisingly complex, especially when it turns out that he hasn’t come back alone.

While Torchwood try and cope with a new mayor and a terrorist cell, they also have to deal with what, at first, looks to be a plague, and then turns out to be something far, far worse.

Ritz Towers is a luxury tower block so exclusive not even aliens can get a place there. Mr Colchester has somehow secured a flat at the Ritz. With the streets increasingly troubled, his husband feels safe there. The problem is that Ritz Towers is anything but safe.

For a start, the building has more tenants than it has flats. Then there are the endless dinner parties. The whole new definition of upwardly mobile. And finally, there is the very mysterious caretaker.

Welcome to Deliverables. Thanks to us, Cardiff is enjoying an economic miracle. We have created thousands of jobs. We have wiped out homelessness.

More importantly, there are so many benefits to you. Deliverables will deliver your post, your packages, your meals. We are Deliverables, and we never stop.

5.8 The Empty Hand by Tim Foley

An innocent refugee has been shot point-blank on the streets of Cardiff. It causes an upsurge in terrorist attacks.

An innocent refugee has been shot point-blank on the streets of Cardiff by a policeman. It’s a catalyst for protests in the streets.

An innocent refugee has been shot point-blank on the streets of Cardiff by Sergeant Andy Davidson. It’s the end of Torchwood as we know it.

This is the kind of Torchwood I love...It feels like it’s written in one voice but each story is unique. It feels like the style you want from Torchwood, but it isn’t afraid to expand into new ideas. 10/10

The second part of Aliens Among Us has a heavier focus on character which is very well-executed and much appreciated. These are four great individual stories that allow the cast to shine. Full cast stories with big series arcs is definitely the way Torchwood should be facing: forwards. 7/10

While we love the other Torchwood audios, Aliens Among Us really does seem to be taking the show forward with gusto! 4/5

During the final five minutes of this story, (Mac) Rogers managed to take me on one hell of an emotional rollercoaster...Christopher Cooper has done an amazing job at making a story which features an interesting alien concept be focussed so much on the humanity (or lack thereof) of the main cast…(Janine H Jones’) pacing was brilliant, it gave us a unique insight into a world that the majority of us know about but don’t question, and has some really impressive character driven scenes....Tim Foley manages to brilliantly write realistic motivations for every character in his story.