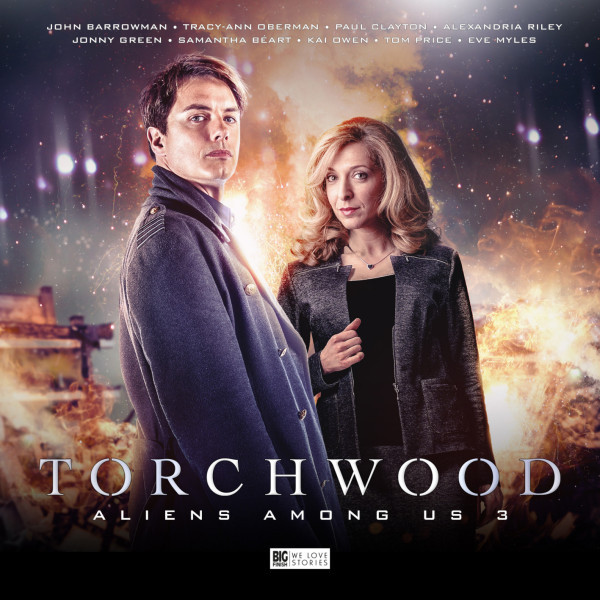 CD
US $47.50
Buy
Download
US $29.99
Buy
Save money with a bundle Login to wishlist
24 Listeners
recommend this

Big Finish picks up the events after Miracle Day with Torchwood: Aliens Among Us...

Captain Jack and Gwen Cooper have restarted Torchwood. But it's in a very different Cardiff. Something terrible's happened to the city. With every day getting darker, will a new arrival prove to be the ally Torchwood needs?

Torchwood are in trouble. Terrorist attacks are rocking the city. Control of the police has been ceded to Cardiff's alien masters. And it looks like it's all been arranged by Captain Jack Harkness. Worse, there's a dead woman in the cells who says that Torchwood will be hers by dawn.

Gwen Cooper, Rhys Williams, and the Colchester-Prices go to try out an escape room. They've heard a lot about them. Especially this one. People keep going into the game and not coming out. But Torchwood will be fine. After all - partners can trust each other. Can't they?

5.12 Herald of the Dawn by James Goss

It starts normally enough: a car park full of ramblers is incinerated by a thunderbolt. But the next day it's clear there's something very wrong. Something's changed. Something's coming. It's the end of the world. And that's what Torchwood are best at...

Tagged: The use of some first person narration sets this one apart, and gives it an edge (as well as leading the listener to make some perhaps unwarranted assumptions). It may be an old idea – but it’s brought into the Torchwood age extremely well.

Each installment is special in its own right, from intense, character-driven moments to bigger, explosive scenes, all directed with flair by Scott Handcock and performed masterfully by the cast involved. Comparing each volume, this stands above the rest and will leave you desperate for series six...

This is award-winning stuff. These four episodes are the amazing culmination of a lot of talent, hard-work and complete dedication to excellence. Well done again to Torchwood, twenty-first century drama at its best.

Continuing the story of Torchwood while also making some nods to the past, as well as using old characters in a meaningful way rather than simply fanservice, is the perfect balance. The series is in safe hands with James Goss and Big Finish at the helm.

Everything changes and I’m most definitely ready for it. 10/10 Indie Mac User