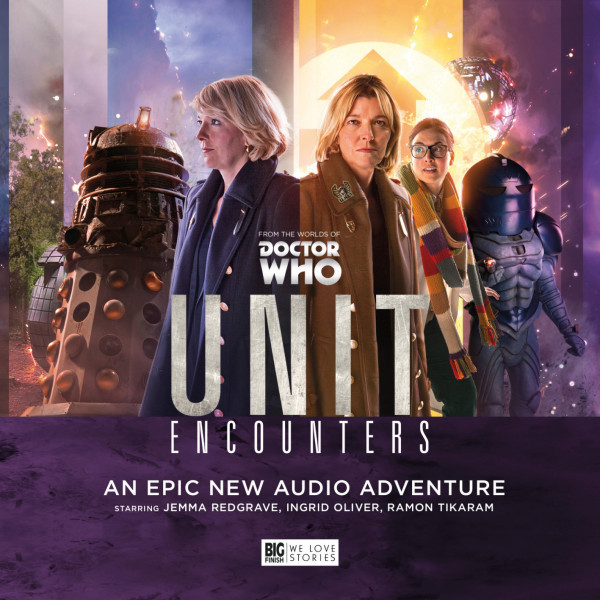 CD + Download
US $37.21
Buy
Download
US $31.01
Buy
Save money with a bundle Login to wishlist
27 Listeners
recommend this

Protecting the Earth is a full-time job, but Kate Stewart and her team are always prepared. Join UNIT as they deal with threats from other worlds, and some from closer to home...

5.1 The Dalek Transaction by Matt Fitton

When a rogue guerrilla faction offer an alien artefact for auction, Kate Stewart and her team go undercover to the jungles of Central America. But they find that the prize on offer is far deadlier than its owners realise. Captive, desperate and alone. That’s when a Dalek is at its most dangerous.

It’s Hallowe’en, and Josh finds himself at a party where phantoms are becoming all too real. Osgood is working late and hears a voice from the skies making strange incantations. The next day, Kate has gone missing in the Scottish Borders, and the team head north to investigate. Ghosts from the past are haunting UNIT, and now they threaten the whole world…

5.3 The Sontaran Project by Andrew Smith

On a routine reconnaissance mission, Colonel Shindi finds more than he bargains for in the Forest of Ardennes. Back in England, an old colleague makes Osgood an offer she cannot refuse. The chance to take part in an exciting new scientific advance. Before long, UNIT is on collision course with a force of alien clones, and Kate must forge an unlikely alliance.

When a strange travel capsule is activated in UNIT’s laboratory, Osgood and Josh find themselves in a whole new world of trouble. Soon, nobody at UNIT HQ is quite who they seem, and the team discovers that the greatest danger they could ever face comes from within...

It’s wonderful to have the whole UNIT team, save Sam Bishop who is off on another James Bond mission, working together. Fitton’s script balances the screen time and gives every team member enough to do to warrant their inclusion. Oh and did I mention the banter? Yes, we have some good banter here folks. The chemistry in this team is strong."

An experimental collection of adventures exploring the UNIT family further, including a fascist alternative reality of corruption within UNIT itself which is quite unsettling.