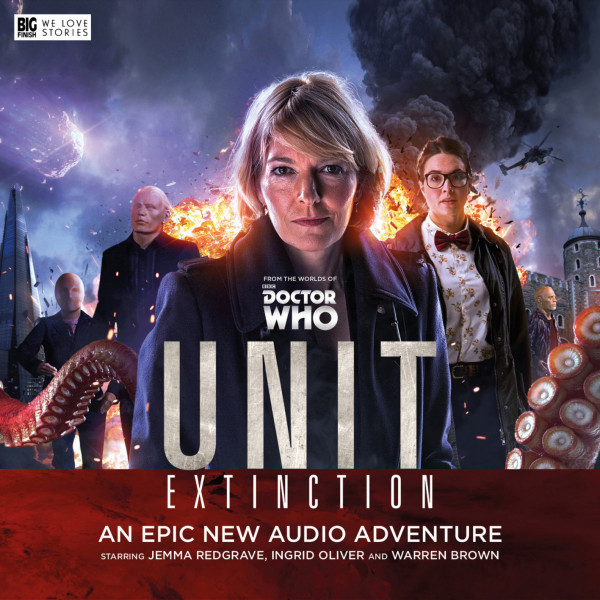 CD + Download
US $37.03
Buy
Download
US $30.86
Buy
Save money with a bundle Login to wishlist
50 Listeners
recommend this

Kate Stewart, Osgood and the UNIT team confront an alien invasion by the Nestene Consciousness and its army of plastic Autons.

From a state-of-the-art bunker beneath the Tower of London, Kate Stewart leads a secret army protecting the Earth from extraterrestrial threat. Crashed UFOs, strange meteors, a giant lizard in the Severn - all business as usual for UNIT.

Journalist Jackie McGee is also on FutureTech's case, and nothing's going to get in the way of her story: a product launch that will change the world...

Lieutenant Sam Bishop is finishing an assignment in Bangkok when he receives a call from Kate Stewart. She has a new job for him - hunt for a stray Nestene energy unit that has come down somewhere in the Gobi desert.

In Mongolia, Sam is joined by Osgood and they set off into the Gobi. But there are Autons in this desert. They are also looking for the energy unit, and they're ready to kill anyone who comes into contact with it.

Back in London, Kate is becoming suspicious of Simon Devlin's company, and decides to pay him a visit.

With Nestene energy units falling from the skies around the globe, UNIT's resources are stretched to breaking point as they try to respond.

Josh Carter has gone undercover inside Devlin FutureTech. His safety is jeopardised, however, by the activities of investigative journalist Jacqui McGee.

As the Nestenes progress their plans, Kate becomes a target.

As Autons swarm across the planet, the human race faces its darkest hour. Simon Devlin has helped his alien masters gain a global foothold and their scheme is almost complete.

As UNIT leads the fightback on every front, every continent, against an implacable army, Kate Stewart must look to the past for some clue to defeat the plastic menace.

The Nestene Consciousness is growing in power. It has plans for the human race, and when it achieves its ultimate form, it will be unstoppable. Only UNIT stands between humanity and total extinction...

Big Finish's first major foray into post-2005 Doctor Who is cracking stuff. The scripts by Matt Fitton and Andrew Smith are smart and pacey, and director Ken Bentley gives it all a glossy, expsensive feel. Finally, UNIT has the spin-off it deserves.

Shop all audiobooks
Next release in this range: UNIT: Extinction: Vanguard