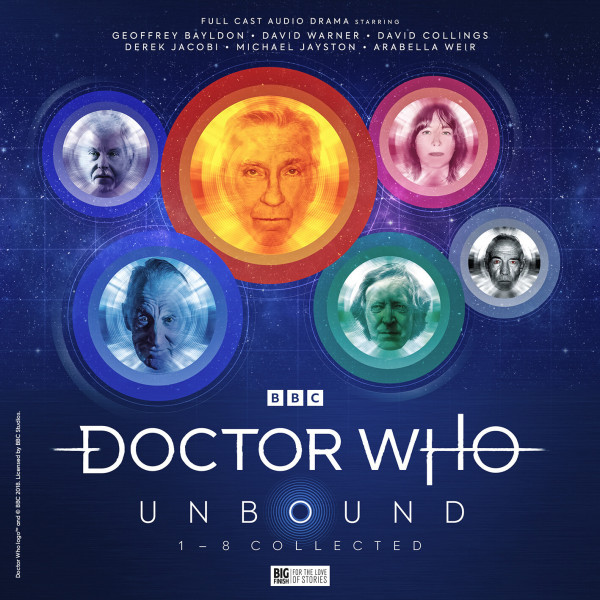 Download
US $28.05
Buy
Login to wishlist
17 Listeners
recommend this

1. Auld Mortality by Marc Platt
What if the Doctor and Susan had never left Gallifrey?
In a marble mausoleum, deep in the cisterns beneath the Capitol, Gallifrey's favourite author faces his ultimate destiny. Who is the woman who claims to be his grandaughter? Who is the sepulchral figure in robes of night? Which path should Hannibal's army take to Rome? And on a snowy mountain high in the Alps, the Doctor remembers the ultimate question: What if he and Susan had never left Gallifrey?

2. Sympathy for the Devil by Jonathan Clements
What if... the Doctor had not been UNIT's scientific advisor?
1997… and a lone exile arrives on Earth, years later than planned. On the eve of the Handover, an advanced Chinese stealth bomber crashes in the hills above Hong Kong. The discredited UNIT has just 24 hours to steal the technology, rescue the passenger and flee to international waters. Down by the harbour, there's big trouble in Little England - a bar owned by an old soldier, who simply wants to forget the past. But an ancient evil is stirring in a place of peace. The Doctor finds a world on the brink of terror. A world that has lived without him for years. A world that is frighteningly like our own…

3. Full Fathom Five by David Bishop
If I told you the truth, I'd have to kill you...
The Deep-sea Energy Exploration Project was apparently destroyed by dirty bombs in 2039 AD, turning the surrounding sea bed into a radioactive tomb. Rumours suggest the DEEP was conducting illegal, unethical experiments... In 2066 the Doctor discovers the research centre remains intact. The terrible truth about what happened 27 years ago will soon be revealed. The Doctor is determined to be the first to uncover and confront the secrets of the DEEP. But unearthing the past can have terrible consequences for your future…

4. He Jests at Scars by Gary Russell
What if... the Valeyard had won?
The thing about meddling with time is that one moment something is real, the next, it's been erased. Probability become just a possibility. Established truth becomes a theoretical falsehood. Like dominoes, as one timeline falls, the others come cascading down around it. You can engineer new timelines, new possibilities but before long, the distinction between what is, what was, what might be and what never can be becomes blurred. Out of this grow myths, lies and legends. The Doctor was one such legend, but no one knows whether he truly ever existed. Well, not now they don't. The Mighty One, ruling the multiverses from the eternal city of Chronopolis has made sure of that.

5. Deadline by Robert Shearman
It's been forty years since Martin Bannister encountered the Doctor. They were different men back then. Martin was young and talented and The Times' seventh most promising writer to watch out for. The Doctor was mysterious, crotchety and possibly oriental. It was an encounter that destroyed both their lives. Pity poor Martin now... His career is in ruins, all forgotten. His estranged wives keep dying in the wrong order, and there's a nasty green stain by the wardrobe that could be an alien footprint or, possibly, just mould. Martin's life is about to change unexpectedly… Impromptu poetry readings. Elephant expeditions. An obligatory bug-eyed monster. And a last, desperate chance for love, before it's too late. Sounds like it's time for the Doctor to come into Martin's life again. And sort him out. Permanently.

6. Exile by Nicholas Briggs
What if... the Doctor had escaped the justice of the Time Lords?
"They want to punish me for being me!" All the Doctor has to do to avoid being caught by the Time Lords is work in a supermarket and go to the pub. It's a cunning plan - certainly far less dangerous than fighting the dreaded Quarks and all those other alien fiends. But just when everything seemed mundane and safe, alien transmissions, exploding poison gas, Princess Anne and wobbly trolleys burst onto the scene to ruin everything. It's a crisis! A fiendish alien plot! And the Doctor must use all the resources at her disposal to defeat it. She'll probably need to have a large vodka first, though.

7. A Storm of Angels by Marc Platt
What if... the Doctor really had changed History, even just the tiniest bit?
1480: Leonardo da Vinci visits the stars.
1508: Vasco da Gama sets foot on Mars.
1585: Francis Drake begins charting the Asteroid Belt.
1588: Earth is destroyed by a storm of angels.
The Doctor was really enjoying his freedom. But now there’s a Temporal Agent on his tail. Gloriana and the President of Gallifrey are not amused. And Susan’s none too well either. Possibilities, like the Doctor, have a habit of running away with themselves. But who cares, when the jewels are so dazzling…

8. Masters of War by Eddie Robson
The Doctor and his travelling companion, retired army officer Alistair Lethbridge-Stewart, take a random trip in the TARDIS - and land on the planet Skaro. The Doctor helped the Thals to defeat the Daleks years ago, so he is surprised to find the Thal city under Dalek occupation. He determines to help them again, but what is the Daleks' purpose in keeping the Thals alive? Does it have anything to do with the Daleks' mythical creator, named in their teachings as Davros?