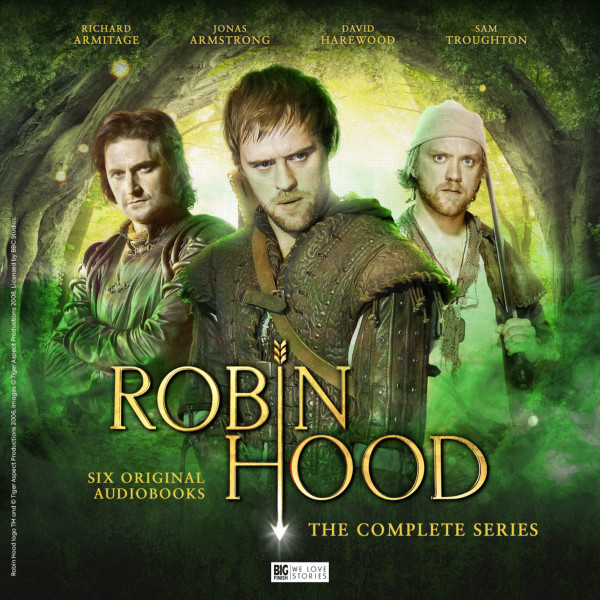 Download
US $24.63
Buy
Login to wishlist
12 Listeners
recommend this

Tales of the legendary Robin Hood, based on the 2006 BBC tv series.

1.1 The Witchfinders by Rebecca Levene
The Sheriff of Nottingham has hit on the perfect plan to finish Robin Hood off once and for all... Accusing the outlaw of witchcraft, he invites a malevolent gang of witchfinders to Nottingham to track him down. Sir Guy of Gisborne leads the hunt - but he has problems of his own. Since the day Marian died, his dreams have been haunted by images of the woman he loved, and now he’s seeing her in the waking world. If the witchfinders discover Gisborne’s secret, will he be the one to find himself burnt at the stake?

1.2 The Tiger's Tail by Jonathan Clements
Once more in a tight spot with little chance of escape, Robin relates a tale to the gang of his time serving with King Richard… Trapped behind enemy lines in the Holy Land, Robin must somehow get the Lionheart to safety. Outnumbered a hundred to one in a forbidding desert, Robin and the faithful Much use disguise and deception to elude their pursuers and save the King. Faced with imminent capture and deadly adversaries at every turn, their mission is as dangerous as treading on a tiger’s tail…

1.3 Friendly Fire by Trevor Baxendale
Robin is horrified when a young villager is killed during a skirmish with Gisborne and his men - and the arrow in the boy’s back is one of his own. As an angry mob of villagers descends on Sherwood, Robin refuses to fight on if innocent people are in danger. Shunned by the people he has sworn to protect, Robin is taken to Nottingham Castle by Gisborne. But Tuck, convinced that Robin is not to blame, attempts a daring rescue mission to clear the outlaw’s name and convince him to take up his bow once more. For how else will free men rally to the legend of Robin Hood?

1.4 The Dambusters by Michael Abberton
The people of Locksley are starving. The Sheriff’s men are seizing all the grain and smashing every mill and grinding stone – but for what sinister purpose? Feisty new gang member Kate has to make a choice: trust Robin’s plan to stop the Sheriff or follow her own path and help the people of her village, while Tuck’s choice leads him into deadly peril. Robin must call on the skills of all his friends if he is to solve the mystery and defeat the Sheriff. But even then he will need help from an unexpected place…

1.5 The Deer Hunters by Jonathan Clements
"Reward: fifty in gold or a Royal pardon for any man, no questions asked, be he Norman or Saxon, poacher or deserter, cutthroat or cutpurse, if he be the one to bring Prince John the intact hide of the fabled White Stag, seen in days past in the forests south of Sherwood Rise...”

When Much sees a rare albino deer, he accidentally starts a race between rival hunters to bring the prize to Prince John. Robin resolves to find the stag first, while Tuck hatches a plan to keep the poachers off his trail. All Tuck needs is a lot of wool, a lot of luck, and two volunteers...

1.6 The Siege by Simon Guerrier
Robin Hood and the Outlaws are on the run from a gang of mercenaries and are forced to take shelter in the ruins of a castle where soon they are besieged. Robin’s more used to breaking into castles, not defending them. But he also knows this castle - he was apprentice to its lords many years ago. A great family brought to ruin by recent, cruel times... No one has dared set foot within these walls since then. Robin and the Outlaws know there's no such thing as ghosts. Don't they?

The Witchfinders takes place between the tv episodes Total Eclipse and Cause and Effect.

The Tiger's Tail takes place between the TV episodes Cause and Effect and Lost in Translation.

Friendly Fire takes place between The Tiger's Tail and the tv episode Lost in Translation.

The Dambusters takes place between the tv episodes Let the Games Commence and Do You Love Me?

The Deer Hunters takes place between the tv episodes Too Hot to Handle and The King is Dead, Long Live the King...

Shop all audiobooks
Previous release in this range: Robin Hood: The Siege