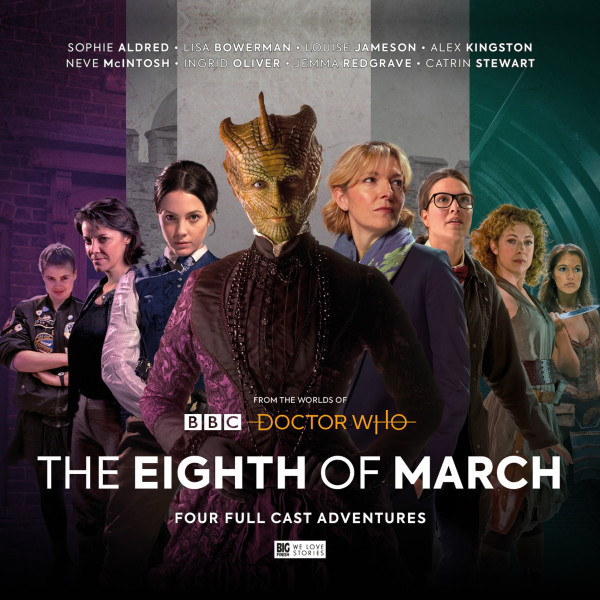 CD + Download
US $36.26
Buy
Download
US $30.22
Buy
Save money with a bundle Login to wishlist
59 Listeners
recommend this

Scattered through all of space and time, there are many women whose paths have crossed that of the Doctor.

Some were once fellow TARDIS travellers, some staunch allies defending the Earth, and one was the Doctor’s wife…

From Victorian London, to an intergalactic convention, from the offices of UNIT, to an impossible university library – on the 8th of March, four very different adventures will unfold.

1.1 Emancipation by Lisa McMullin
When River Song crashes a Galactic Heritage convention, posing as the wrong Time Lord, Leela is sent by Gallifrey to investigate.

But before the canapés are cold and the champagne becomes warm, they find themselves embroiled in a royal kidnapping.

1.2 The Big Blue Book by Lizzie Hopley
With the Doctor AWOL, Benny and Ace are left to their own devices, going native in a Liverpool university.

An alien library is about to gain a big, blue book… but where’s the TARDIS?

1.3 Inside Every Warrior by Gemma Langford
The Great Detective, Madame Vastra, aided by her resourceful spouse, Jenny Flint, and loyal valet, Strax, is looking into a series of mysterious break-ins.

An eccentric scientist and his put-upon assistant are the latest victims. Evidence mounts, with animal footprints and a trail of destruction.

1.4 Narcissus by Sarah Grochala
When one of their own goes missing, Kate Stewart and the two Osgoods decide to investigate.

Narcissus is interested only in the most beautiful people, but as the UNIT operatives are about to discover, its true purpose is something far from desirable.