There's a lot of Doctor Who news, two new releases, we find out the amazing cast behind the latest series in the Big Finish Originals, plus there are some special offers on some of our favourite releases of the year. Don't miss out in the Big Finish roundup.

How can it be September already? To celebrate one of the biggest Big Finish years ever, from now until 23:59 UK time on the 20th of September 2018, you can pick up some of our favourite box sets from 2018 at their pre-order prices.

The trailer for the second volume of Ravenous came out Monday. The Eighth Doctor (Paul McGann) and Liv Chenka (Nicola Walker) have been reunited with Helen Sinclair (Hattie Morahan), but are they ready to face the Ravenous together?

The Ravenous, who appear in the collected Eighth Doctor release, Ravenous 2, are a threat that make Time Lords quake with fear, but the Doctor and his companions have other dangers closer to their hearts to contend with first…

The latest story in the Doctor Who Main Range came out Tuesday. The Dispossessed is the second release in a Seventh Doctor trilogy, and in this adventure there’s another twist in time for the TARDIS team to deal with, but will both Mel (Bonnie Langford) and Ace (Sophie Aldred) survive?

The Doctor, Ace and Mel are caught in a forever night. After crossing the threshold, a strange world awaits them. An army of tortured souls. A lift that leads to an alien landscape. An alien warlord, left for dead, and willing to do anything to prolong his life… it’s all in a day’s work for the Doctor.

But when his companions become victims of the desperate and powerful Arkallax, the Doctor will have to do battle in a psychic environment where he must make a choice.

Save his companions… or himself.

The first tale in a new series of Doctor Who – The Early Adventures came out Wednesday. The First Doctor, Vicki and Steven Taylor face the Daleks once again, but it’s a Dalek tale like none you’ve ever heard before....

The TARDIS lands in the capital city of a planet deep in the midst of an endless winter. The population are celebrating a new crop of candidates winning roles at the scientific research centre. Those who go there dedicate their lives to continued service and are rarely, if ever, seen again. Not everyone is happy to see them leave.

As the Doctor, Steven and Vicki watch, the city leader – Majorian – invites onto the stage in front of the happy crowd their ‘friend who made all this possible’… and a Dalek appears.

The people of this planet seem to be living in perfect harmony with the Doctor’s old enemies. But the TARDIS crew know this cannot be true. So what’s really going on?

The artwork for Series 8 of The Fourth Doctor Adventures was released Thursday. The Fourth Doctor is getting a new companion – but is he ready for her? Plus there’s Ada Lovelace and the return of the Drashigs in The Syndicate Master Plan Volumes 1 and 2.

The artwork for the eighth series of the Fourth Doctor Adventures is out now. 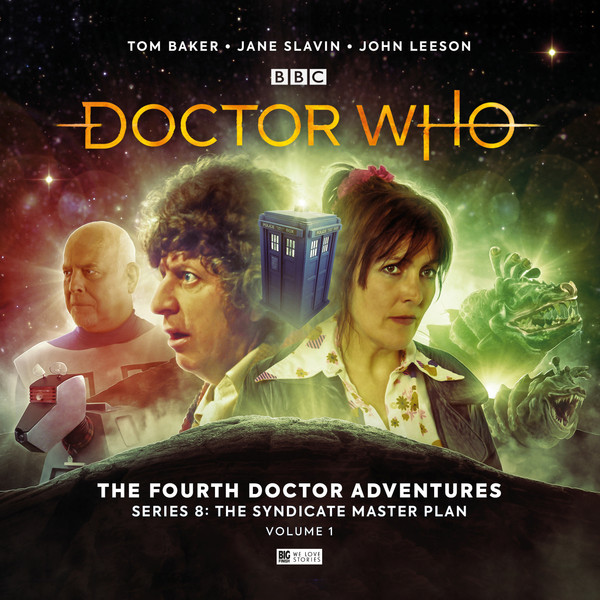 The Fourth Doctor Adventures Series 8: The Syndicate Master Plan starts with The Sinestran Kill by Andrew Smith, in which aliens have become involved in the London crime scene in 1978. Frank Skinner (Mummy on the Orient Express, Callan) plays DCI Scott Neilson while Glynis Barber (Blake’s 7) is Kathy Blake.

New companion Ann Kelso takes a trip into history in The Enchantress of Numbers by Simon Barnard and Paul Morris, as she and the Doctor meet Ada Lovelace (Finty Williams), the daughter of Lord Byron and a Victorian computer pioneer. But what are the bird-masked strangers that are stalking the local village?

Ann’s first trip into space then takes her to the Planet of the Drashigs, where writer Phil Mulryne throws the Doctor, Ann and K9 into a theme park where different species of Drashigs are about to run wild. Fenella Woolgar (The Unicorn and the Wasp) plays Vanessa Seaborne. 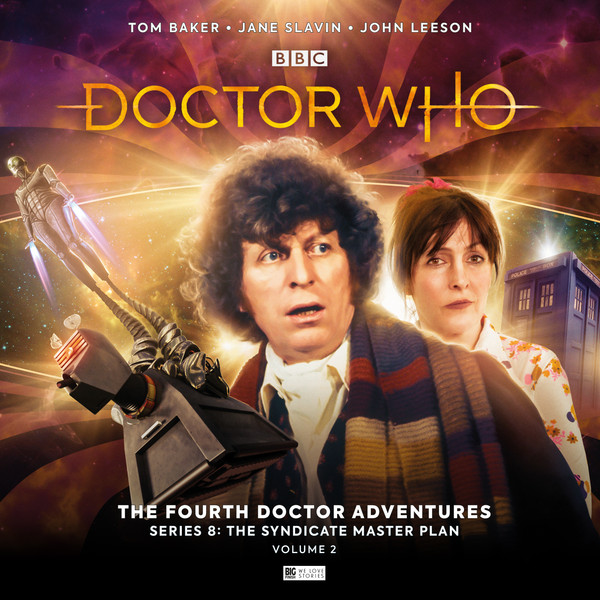 In Fever Island by Jonathan Barnes the TARDIS lands on a misty, mysterious island where scientists are conducting strange experiments, and all may not be as it seems. Gethin Anthony (Game of Thrones) plays Jason Vane. The season ends with a four-part story, The Perfect Prisoners by John Dorney. Ann Kelso’s investigations are reaching their climax, and the Doctor will have to make one of the hardest decisions of his many lives....

There are just three days to go until Shilling & Sixpence Investigate is released, and before its launch we look at the splendid cast in the latest of our Big Finish Originals.

On the 18th of September, Shilling & Sixpence Investigate will be the latest release in our Big Finish Originals range, following ATA Girl, Cicero and Jeremiah Bourne in Time. Today we meet the cast behind this stellar new production from Big Finish.