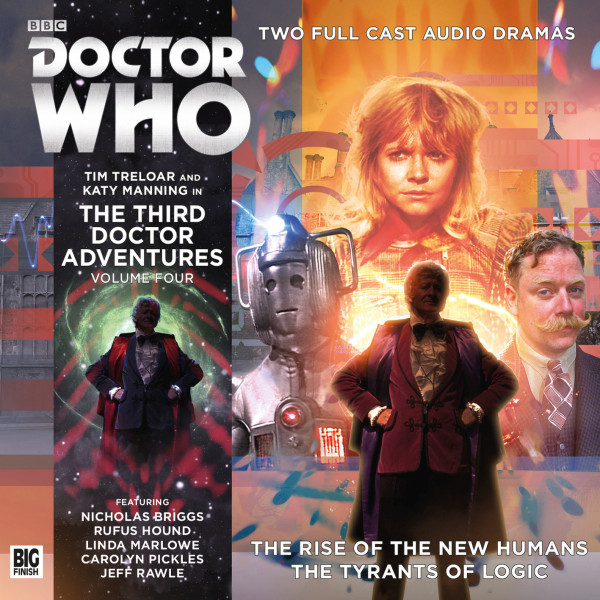 CD
US $40.23
Buy
Download
US $24.99
Buy
Save money with a bundle Login to wishlist
42 Listeners
recommend this

4.1 The Rise of the New Humans by Guy Adams

When a man dies after falling from the top floor of a multi-storey car park, the Doctor and Jo wonder why it should be of interest to UNIT. Then they see the protuberances on the man’s back… As he fell, he tried to grow wings.

Looking into the man’s past leads the Doctor and Jo to a remote private hospital where the staff aren’t as helpful as they could be, and the Chief Administrator is unavailable to meet with them.

Breaking into some restricted wards, the Doctor notes the presence of alien and futuristic technology. The whole thing bears the unmistakable hallmarks of one of his own people’s interference, one of his old foes. Except not perhaps the one he might have imagined.

The Monk is back. And this time his meddling may have gone too far.

4.2 The Tyrants of Logic by Marc Platt

The Doctor and Jo land on Port Anvil – a bleak, abandoned mining colony on the remote planet Burnt Salt. A huge armoured crate has recently arrived in the almost derelict Spacehub. No-one knows who it’s for. No-one knows what it contains.

Strange creatures lurk around the outskirts, and a rag-tag population of misfits inhabit what is left of the town: a saloon bar owner, a literal one-man band and a hunter of very unusual prey. If they want to survive the night, they’re going to have to work together.

Because the Cybermen want the contents of the crate. And they will stop at nothing to get hold of it.

"Tim Treloar continues to shine as the Third Doctor." Starburst

"The Rise of the New-Humans will no doubt stand as one of the best Third Doctor adventures in the audio format." Big Blue Box Podcast

The Rise of the New Humans: 'For those that love a good Third Doctor yarn this is it. There’s action, humour, monsters... 9/10' - Blogtor Who

The Tyrants of Logic: 'Marc Platt... may have just surpassed his own best. A touching and human story which is a stellar counterpart to the ‘The Rise of the New Humans’.10/10' - Blogtor Who

"Tim Treloar who once more gives a momentous performance that so expertly depicts the stylings of Jon Pertwee that covers the indignation, pride, and humility of the brave Third Doctor. ‘The Tyrants of Logic’ is another absolute delight from the mind of Marc Platt and a strong ending to this fourth volume" Doctor Who Reviews, The Rise of The New Humans, The Tyrants of Logic

“These stories are a well-matched pair, demonstrating what a good team Jo and the Doctor make and providing plenty to put both actors through their paces. Katy Manning is naturally pitch-perfect as Jo, while Tim Treloar seems well into his stride and his portrayal grows in confidence” Cultbox

"Tim Treloar and Katy Manning embody their roles as superbly as ever. Rufus Hound eats the scenery with every known condiment and invents a few more condiments before he’s done." SciFi Pulse

"The Third Doctor Volume 4 is a fabulous investment in aural pleasure. All hail Tim Treloar and Katy Manning for bringing the Third Doctor and Jo fully back to the fans." MassMovement